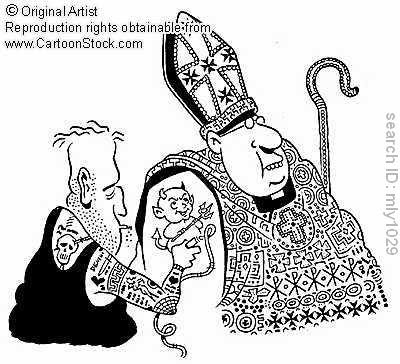 I went to an exclusive boys school run by La Sallian brothers for my primary and secondary education. In spite of the prohibitive cost of education in private schools, my parents felt that a religious upbringing would provide better formation for both me and my sister. I spent 11 years in La Salle.

I can say that I have had my share of Religion and Theology classes during my educational years. The only time I was not exposed to any formal religious education as part of any curriculum were during my Internship in an army hospital and my Fellowship training in the United States.

At almost every point in my life, my trust and faith in my religion was tested time and again. During those "aha" moments, I praised God for the fortune he brought my way. During those depressing days and tragic times, I could not help but ask - why me? In between the bipolar episodes of joy and sadness, I pray each morning for a good day ahead and each evening thanking Him for having survived another day. I guess this scenario does not apply only to me, but to the majority of Catholics as well.

The story on my religion is not the story here. Neither is it about faith. It's about the church in the changing times.

The Philippines is a predominantly Catholic nation, with 85% of the population being raised a Catholic. Here, marriage in Church is the gold standard of union between man and woman. children born should be baptized in Church. In Catholic run schools across the archipelago, communion and confirmation are blessed sacraments that are practiced and obeyed. Every form of event from birth to death or simply requiring a blessing (house, building, cars, events, opening of a mall or gas station or business enterprise) will have a priest in attendance.

As I grew older, I realized that there were marginalized sectors of the population that did not receive as much attention as those who had money to rear their children in Catholic schools. The church gave in to requests from mall owners to hold masses in malls during Sundays. An odd acquiescence to a dumb request. What was the difference if Purok 16 in Smokey Mountain Tondo, Manila made a request for the priest to go to the warm, stench-riddled area to hold a weekly Sunday mass? I have always believed that the Church should not be holding masses in malls simply for the convenience of shoppers - majority of whom belong to the upper and middle class - who are too lazy or stubborn to go to the right place of worship.

The Iglesia ni Kristos or the Jehovah's witnesses or even Christian Life Movements do not have this unusual practice like the Catholic Church that allows masses in places of non-worship because of financial gains. The latter is my own deduction. Perhaps I do not understand the concept of allowing masses to be held in shopping centers, but I have always believed that when we need to practice our religion and we need to thank God, we go to Him. I mean, why make priests hold masses in malls where the blaring sound of Justin Bieber or Mariah Carey competes with the ongoing choir or sermon? The distraction in itself does not serve a purpose. The attendance in masses becomes mechanical and rote. It is a bad excuse to say that there is a lack of priests when we find them in this situation. And when the Church is more prone to accepting requests from paying patrons where the gatherings will provide them more financial returns than from the poorer people where Church events will probably generate only a pittance, then you know that the vow of poverty is probably lip service.

And so the story goes that over the years, I have seen many of the Catholic faithfuls drift slowly away from the Church that I grew to know. Friends, acquaintances, and even loved ones have had a change of heart on the faith they grew up to.

The last Holy Week was a concrete example of the drifting of solemnity in traditional events of Christian religion. Two decades ago, the Holy Week would see all business establishments shut down from Holy Thursday to Black Saturday, to commemorate the Passion and Death of Jesus Christ. People were in churches doing the Pabasa or watching some guys masochistically flagellate themselves. The Holy Week was a time of reflection and recollection and atonement for sins prior to the resurrection of our Lord.

Since a decade back, the Holy week became a traditional event for Filipinos to go on an Exodus - to the beaches, the provinces, jetset to Hong Kong or Phuket or New York. The churches were not that full and the passion of the Visitas Iglesias and the way of the cross has become less and less palpably visible, especially among the younger generation. Those who were left in the city were said to be those who did not have the cash to splash!

The recent debate on the Reproductive Health bill has caused a row of name calling on the side of the church officials as well as those pro-RH bill. It has come to the point where church officials in the Philippines have taken a stand and castigated those who are pro-RH bill as un-catholic in values and a devil's advocate. The division has deepened as the gathering storm where the prolife group in exclusive enclaves like Ayala Alabang have implemented banning contraceptives in their neighborhood. Even if the barangay ordinance is being contested by the local government authorities, barangay officials in Ayala Alabang remains defiant with the Catholic Church going overboard to defend the inanities of some secular denomination.

Government officials, especially congressmen, are playing pussy politics where they watch the storm from afar. Afraid to get the ire of the church, they have delayed debates and action on the pending bill because of popularity issues. Since the protestants have now taken side with the government regarding this issue, the wounds inflicted on the Catholic church have now deepened.

Those caught in the conflict are not the extremists - the believers and non-believers, the faithful and the atheists. They are the people in the middle.

Where was the church during the corruption allegations of the government of GMA? Where was the church during the atrocities committed among the people who died in the Maguindanao massacre? What is the alternative plan of the church to the RH bill and what will the church do for the people instead of providing lip service? How will the church lead its flock at a time where even the church is embattled with scandals left and right on morality among the rank and file and some of its leaders? How have the catholic schools addressed calls for austerity measure in terms of rising tuition fees in this time of inflation? Why have the marginalized sector of society received less attention from the church compared to those residing in enclaves of the rich that have churches not accessible to the poorer community? Where was the church when issues on health and medicines was being tackled in congress and the senate?

It is at this time when the church needs to review its mission to the greater good of the Filipinos. The microscopic view on the RH Bill is a totally absurd view on reproductive health and is by and large not a pro-abortion law. I suggest that people read the draft bill so that they can provide constructive comments and criticisms and engage in healthy debates that can enlighten both pro- and anti-RH bill. The issues raised must be taken point by point and not swept as a generalized statement that the reproductive health bill is the work of the devil and that it is anti-life. This is not fair to generalize that all the people of the Philippines will not benefit from the reproductive health bill. The choices one makes is always for the greater good. I think people do not understand that PUBLIC HEALTH policies are for the greater benefit of the majority and not one for the privileged few. And if there is a majority or minority that does not understand this message, it is best that explanations and doable alternatives be provided. One cannot use the pulpit to scare the people, especially the misguided, uninformed or misinformed based simply on the demerits of the proposed bill. Since the church has gotten itself deeply involved in this imbroglio, it must provide alternative plans in reproductive health as well as avoid threatening to excommunicate people or banishing their souls to hell early on. There needs to be a more pacifying resolution to the way the issue is being handled - intelligently and in a non-confrontational manner.

I don't think God would have wanted to see this scenario where officials of the church has divided its flock. The division is self-serving to say the very least. There is a need to take into account the greater good of all the people.

Regardless of religion.
Posted by Kid at heart at 9:20 PM