There's been so much exchange in opinions on various issues - from economics to politics to entertainment to health - in the newspapers lately.

Here are some of the news that made the headlines this week and while I post each side's viewpoint, here's my take on the them: 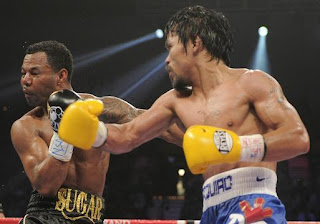 1. PACMAN AND STEROID USE.
He said: Mayweather tweeted a link to an obscure boxing news site that had an article claiming that a former sparring partner of Pacquiao, who happened to be Filipino, claimed that he was the one injecting steroids to Manny at the Wild Card Gym, and that it began before the Oscar De La Hoya fight (according to an ABS-CBN report)...

Pacman said: "An anonymous post on an Internet forum claims an unidentified former Filipino sparring partner injected me with steroids before my fight with Oscar De La Hoya and in subsequent fights. This is completely false, totally fabricated, and, not surprisingly, leveled by someone who will not even identify himself. I did not even have a Filipino sparring partner during my training for the fight against De La Hoya or for any fight since then."

"I have never taken steroids, HGH, or any banned performance-enhancing drug. Period. My success in the ring is due to hard work, belief in God, and the support of my fans.

"Like every boxer, I am required to take drug tests in connection with every professional fight in the United States. I have passed every one, including my fight against De La Hoya and my most recent victory against Shane Mosley."

"I will fight to protect my hard-earned good name and reputation."

I say: This allegation has been running around in circles for the last few years. Mayweather refuses to fight Pacman unless Pacman has a drug test done. While Pacman claims that he has "passed" the drug tests for every professional fight, there's still the question of why he refuses to take the appropriate drug tests Mayweather is asking of him as a requirement to their "dream match". And it's not true that taking a little amount of blood would make one weak. I mean, really now. Gimme a break! And just because he is Pacquiao does not give him the right to whine like a baby regarding this. Of course, there are the nincompoops who believe that we should give Pacman a break on this issue. After all, to them, he is king of the ring. Who the fuck cares if he fights well? Give us a real fight Congressman MP! Idiots are making him rich over these sissy, one-sided, entertainment galore! Take the challenge of Mayweather. Have the goddamn blood test done. And give us a fight that will shut up the world! 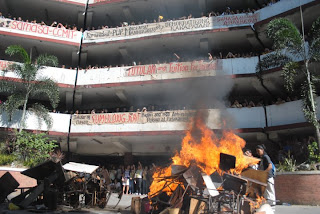 2. 300 Private Schools to Raise Tuition Fees this coming School year.
He said: The CHED announced Friday that close to 300 colleges and universities in the country will hike tuition this year...69 private colleges and universities in Metro Manila are expected to hike tuition this coming school year, with St. Luke’s College of Medicine eyeing a 12-percent increase.

On the other hand, University of Santo Tomas, De La Salle University and UE-Manila will have increases of 3.75 percent, 3.5 percent and 4.35 percent, respectively.

They said: They need it to improve the quality of education and the rising cost of maintaining a school.

I say: You ever wondered why it's these Catholic- and church-run schools that actually raise tuition fees year in and year out? And the teachers only earn a pittance compared to the staggering cost of the tuition fees the parents and families have to shell out. It ends up with only those who can actually afford these mind-boggling sky rocketing tuition fees (READ: THE RICH AND THE VERY RICH) that can send their kids to school. What is actually weird is that church run schools have tax incentives and holidays and rebates compared to private schools that are not under the domicile of a religious order.

A larger majority have to contend with government run institutions, but then again, the government run schools are now being infiltrated by the rich! Once upon a time, the University of the Philippines had more poor and deserving students. But because the quality of education there is excellent, the rich now shove their way into the state-run university so that their kids can get good education at the lowest possible cost.

Two solutions: CHED must investigate if these church-run schools are actually making a large profit from the tuition fees collected. If so, the church-run schools MUST pay taxes accordingly. NO exceptions to the rule. Government and state run schools must proportion the number of enrollees to benefit the mission and vision of the republic. Fix the admission rate at 75/25, where 75% are poor and deserving and 25% are the rich and deserving. The latter 25% should pay 400% of the actual tuition fee to cover the cost of enrolling 75% of the poorer but deserving students. After all, they can afford this. 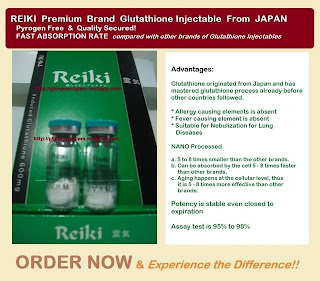 3. Intravenous Glutathione warning from Philippine FDA.
He said.
With the new age of advance skin science, you can now have a celebrity skin and put an end to DARKness!

Now you can easily achieve the complexion you have always wanted.

This is the ad that you see on superwhiteningpills.net. And this is the exact same claim as all the other glutathione products in the market.

The Food and Drug Administration said.
Food and Drug Administration of the Philippines warns the public against the possible side effects of glutathione injection as whitening. Glutathione injectibles is not an approved skin whitener. High dosage might cause skin rashes, severe abdominal pain, steven-johnson syndrome, toxic epidermal necrolysis, derangement in thyroid function, kidney dysfunction and failure and gastrointestinal pain. When administered orally, it is hydrolyzed by gastric juices…Intravenous injection delivers very high doses directly into systemic circulation and may overload the renal function. Glutathione is an antioxidant, whitening the skin is just a side effect.

I say.
Glutathione comes in two forms - oral and parenteral. The oral formulation is rapidly and extensively destroyed by the gastric juice. Which means that taken orally, only a small amount of glutathione is present in blood. The parenteral or IV preparation is not legally commercially available or approved for skin whitening use because of the very high dosage it carries and that it is not registered as a drug or indication for this use in the Philippines. While it claims to have "antioxidant" properties, like all "food supplements", this carries a tag where there is "no approved therapeutic indication" for skin whitening.

I have given lectures on the scientific merits (and demerits) of "food supplements" and I have blogged about it already. The key word here is "supplement". Which means, that unless sound and scientific clinical trials have been thoroughly conducted on a product which purports to provide a clinical indication for treatment, the product is labeled as a supplement which has no approval as a DRUG. Supplements, undoubtedly have a larger margin of safety and hence, go through the back door approval of being approved for supplemental use at LOWER DOSAGES. Increasing dosages pose treatment problems because as the dosages are increased, so are side effects.

Which goes to the advertisements of these products. ALL supplements do not carry black box warnings, and neither is the public informed about their adverse events. The danger here is that the public is led to believe (or deceived) about taking more than what is recommended as a food supplement. The public (and some doctors) tend to think that increasing doses will provide more rapid and definite benefits.

Vitamin C for example, taken more than 1 Gm a day increasing the risk to formation of kidney stones. In the same vein, glutathione at the recommended oral dosages may provide some anti-oxidant effect. However, at the larger intravenous doses, which are by far experimental and have no scientific evidence (or clinical trials conducted), reports on allergic reactions resulting in death, destruction of the thyroid gland, renal dysfunction and congenital malformations during pregnancy are cause for alarm.

Clinical trials serve as the backbone of the pharmaceutical industry because they not only provide evidence of efficacy, based on scientific data of the correct dosages for drugs (lowest dose to give the optimum effect), but on the safety of the products as well.

There is no one drug (or supplement for that matter) that is universally safe and it is wise to remember the saying that one man's medicine, is another man's poison.

I am thrilled that at least the local FDA has put out this notice and pray that the public heed the warning. There is no need to get that glitter white look by taking medications or supplements that may not suit you or have not been studied well enough, at the expense of developing fatal complications later on. You have enough time to look pearly white when you're dead.
Posted by Kid at heart at 6:42 PM