Like most Chinese children in the Philippines, I grew up having to juggle with three languages and other dialects during childhood. In short, while my parents and grandparents spoke Fookien and Mandarin alternately, there was English and Tagalog in my vocabulary. My nanny spoke broken Tagalog because she had a "Bisaya" dialect. I don't recall when I spoke my first few understandable words, but I'm sure it was, like many other infants, a foreign language, to many.

In my clinic, I get a lot of queries from apprehensive parents as to why some of their toddlers cannot seem to compose understandable sentences at the age of 2 years old while some of the other children they see who are the same age as their kids are verbally competent.

There are many reasons why there is a delay in language development in children. This blog post is not intended to diagnose or treat language or speech problems. My readers will get bored with the dissertation on speech/language problems in children. However, since some of my readers are parents who may want to share a little information regarding this, let me point out the warning signs of a POSSIBLE language and speech problem in a child:

1. First, let's distinguish the difference between speech and language. Speech is the verbal expression of language and includes articulation and the way the sounds and words are formed. You notice sometimes how children lisp or cannot pronounce a few letter or how the Filipinos pronounce F as P and V as B and vice-versa. That's a speech defect. Language on the other hand is more broad. It's the entire vocabulary system and has something to do with verbal, nonverbal and written communication.

2. With that as an initial premise, there is a wide array of assessment for a child with speech or language delay. Let me enumerate just two:

A. If the child is less than 2 years old - you should get worried if the child does not use gestures for desire (wave bye-bye or point to what he wants), prefers gestures rather than verbal communication and cannot imitate sounds by 18 months, and has difficulty in understanding simple verbal requests.

B. After 2 years old, parents and caregivers should understand half a child's speech by 2, 2/3 of it by 3, and by 4 should be completely understood even by strangers.

With that said, when a child is worked up, the basic work-ups include hearing assessment for the child or a neurodevelopmental assessment. Part of the work-up includes a speech pathologist. The latter is far and few in the Philippines but can be found in some university settings (which means that instead of taking nursing programs, a lot of those that plan to go into college may want to consider taking this course which is part of an Occupational Therapy program).

With both parents having to shuffle off to work, that leaves other relatives or household help as caregivers to children left in the homes. The disparity in language used for communication skills early on becomes confusing to the child, not to mention that many of us just put them in front of a television screen and expect that Barney and Dora would eventually teach them how to speak. It's not uncommon that when the "masters" have gone to work, the child (or children) is/are left with poorly skilled nannies with very bad judgement. The nanny switches the TV channel to some midday or noontime show that has Vice Ganda or other two bit wannabe host and guest so that the nanny is entertained. Leaving the child dumbfounded at the kind of language that's being spewed from the entertainers lips - anywhere from "swardspeak" to the world of the jejemons! Of course, when the masters arrive, the child is back to watching Dora or Mr. Bean, as if the world had been as normal as it could get the morning they left for work. 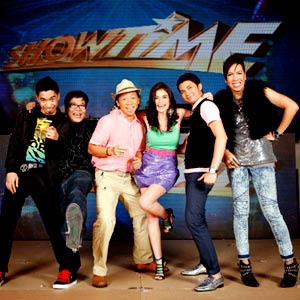 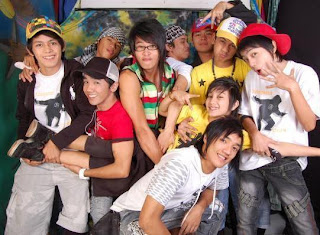 Entertainers in the Philippines are amusing and the greater majority of its rabid fans duplicate their antics - from the way they dress, to the way they cavort with each other, and finally to the false endorsements they make. And the people will follow! No matter how stupid or ridiculous it is.

In yesterday's Philippine Daily Inquirer (Saturday Special), there was a short (probably unnoticed) article there that read as follows:

"Antonio Ramos, a retired accountant from West Covina, California, is calling the attention of ABS-CBN broadcasters: 'Despite their vaunted Ako ang Simula campaign, they are the simula themselves in teaching our countrymen wrong words in Filipino. Examples: sumemplang, timbog, minarder, minasaker, natripan, inaplay, sinampolan, karambola, binoldyak, dedma and other Taglish words like Boy Abunda's "NOW NA!" and Noli de Castro's "Ti-Bey Patrol", tsibog and other salitang sanggano. The network has a program here in the US, "Pilipino Ka Sabihin Mo (PKSM), teaching Filipino-Americans how to speak Tagalog. But, our countrymen, particularly my children and grandchildren who were born in America, are surprised to hear such words and ask me about what they mean. These aren't taught on 'PKSM'. To Kim Atienza: How did life become "weather-weather lang?" What's your basis? As for Abunda, is it difficult to say "Ngayon Na", instead."

The irony here is that the double standards in media will always try to find some god-forsaken reason for doing what its hosts do (look at TV5 on how MVP protected Willie R all the way) and it's other hand will do some other thing.