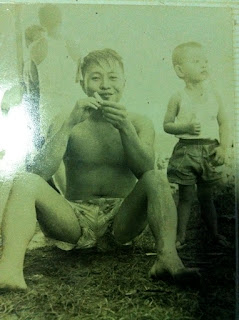 This month celebrates father's day, my birthday and my dad's death anniversary.

Somehow, I cannot tell if my bipolar world has been activated in some weird way because of these events.

My dad and I were probably not that close. Considering that I was the eldest of the brood of our clan, I should be donating the seedlings to multiply our family name. But as fortune and choice would destine it, I would be the last of our breed. It's probably why there was no "man to man" bonding between my father and I.

But as I grew older, and even if there was this policy of "don't ask, don't tell" in our house, I knew he knew. And I knew deep inside me that it was painful for him and pointless for me to change.

The only compromise I had with him (in not so many words) was to fulfill a dream he had - to have a son that finished a medical degree.

Which is why when I shifted course from General Science (Pre-Medicine) to Mathematics in my undergraduate years, it was devastating for him. I never wanted to be a doctor. But somehow, I kept my end of the bargain and he kept his - he never asked me about my sexual preference.

We do not come from a wealthy family.

In spite of his diabetes, my dad worked day and night to make ends meet. I could see the frustration in his eyes when it would be school time again. It was time to borrow money from the office because enrollment was at the corner. My sister and I are only 1 1/2 years apart, which meant that we were both going to college at the same time. And when I trotted off to medical school, I knew that the financial burden would only be aggravated. We had loans to pay, considering that we had just finished building our house.

But my father was a quiet man when it came to family matters. You could read the frustration in his eyes when it came to money matters. But you could see his determination to juggle more work so that he could make ends meet in order to provide for his family. In his life, there probably were more bad days than good ones.

In my own world, I could not let this man who provided a roof over our heads, food on our tables and weekends on the boulevard down. There were days when I felt I disappointed him seriously.

The last step to graduate from medical school was the oral revalida. My failure there hurt me at the core of pride. It hurt my father at the core of his dream. It devastated me because I failed my father - again.

And while he kept his silent frustration to himself, he also revealed the side that would inspire me later on. He crept into my room and told me that I was free to choose to continue with medical school or choose to chase my dream.

It was not an act of frustration or desperation I saw in this man.

It was an act of selfless love. No questions were asked. No reprimand. Simply giving in.

A few days after swallowing my pride, I went back to med school. A young man with a new direction in life. More determined. More motivated. More focused. More inspired.

Where I am today is all because of my father's inspiration. And I know that even if he is not around to see what I have become and what I have achieved, I know wherever he is, he is smiling down at me with approval. In my life, failure will not be an option - because the man who taught me how to survive life's biggest challenge was my greatest inspiration.

I will always remember that inspiration that my father was - to give without counting the cost, to share even what we need ourselves, to give the best even when it hurts. It is possible to give without love, but it is impossible to love without giving.