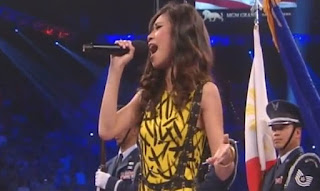 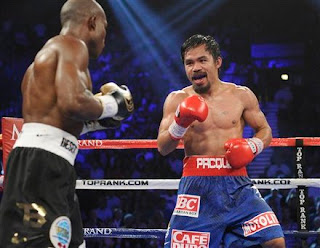 These were the exact words that Susan Roces blurted out to former President Gloria Macapagal-Arroyo when the latter had won the presidency over her husband in a cheating marred elected. GMA had also taken over President Joseph Estrada when the latter was deposed from office by a handful of people belonging to the upper echelon of society, in what is tragically history's EDSA II.

And so what goes down in history for 2012 is how the Americans had apparently cheated Filipinos or those of Filipino decent on the plum crowns for singing and boxing, from a country that apparently proclaims itself to be the land of the brave and free.

First down was Jessica Sanchez who lost to a WGWG (white male with guitar) contestant. Of course, I'm not sour-graping. On a mano-a-mano singing level, Phillip Phillips was a distant contestant among the five finalists of AI. As to why he won - perhaps only the Americans will know. As they say, even if you were born and raised in the United States of America, your color and race will still matter in the end.

Then there was Manny Pacquiao. While I am not a boxing fan, and definitely not a Pacman fan, I did watch the Pacquiao -Bradley bout. And clearly, Pacquiao won hands down. There are several analysts that went on to defend why Bradley had won, but I guess this was one for the books. Bradley was "Desert Storm" and the symbol of America. Pacman needed to floor him to win. Perhaps Pacman showed signs of his age in the last few rounds of the fight. Perhaps it was a throw-away fight (as everyone knows that boxing is a gambling game). But three people deciding on who the victor was in the fight clearly saw it all differently compared to all the other sports analysts who were covering the fight.

Glaringly and clearly, I don't think the Americans are ready to give any prize awards this year to Filipinos or anyone not belonging to their race for sure.

It just shows you that even in the country where millions flock to in search of greener pastures, discrimination will remain inevitably be their foremost enemy.

Even in the land of milk and honey, we will always be second class citizens.

Not once, but twice over.