The vice-president and the popularity polls 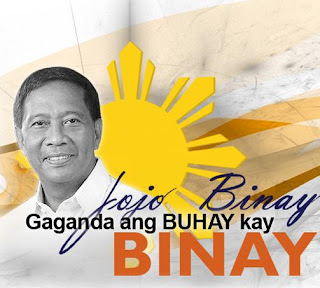 Strangely, when someone DOES NOT do anything, he or she is the most popular.

It's because the one that is the least seen or heard, is usually the lesser evil.

And this is how the popularity polls SHOULD BE interpreted.

Let's look at the perfect example of the SWS polls being conducted to trump those well liked versus those despised in government service.

Survey says: BINAY tops the list of most liked. Like yeah, sure. What in the world has the Veep done in the last 2 years that he's liked?!? Like ALL the other Veeps in the past, there's always that wonder of all wonders on what his role in life actually is. Like all Veeps in any organization, the Vice-President of the Republic of the Philippines is left in limbo or purgatory. All you need to do is remember the roles of Noli de Castro or Joseph Estrada. They are provided the least stressful and least useful of all government positions. No one cares if the Veep lives or dies. They always are - inconsequential.

So now Jejomar Binay is rocketed off to an inconsequential role - housing czar?!?! That's the same weird role of Noli Boy, and where have these housing contributions and loans gone to? Our monthly contributions of P250/month is about P3000/year. If you work for 10 years that would have been P30,000.00 You think that would be enough to buy you a house?!?! Nails for the house probably or some god-forsaken shanty. I think this Pag-Ibig fund is a joke. A big joke on the contributors and a big joke for the borrowers.

Going back to the Veep, I cannot recall a single thing that would catapult Veep Binay to a "likeable" category. All I recall about him after he was elected Veep of the Philippines is his transferring his office to the Coconut Palace AND his desperate attempt to stay the execution of the Pinoy drug mules - a case of procrastinating the inevitable. After the government had spent money for his trip, the Pinoys were still executed.

Perhaps it was a blessing that Mar Roxas lost the last election. Had he won, he would have been in Binay's shoes - a position of complacency.

Well, it gives time for Binay now to jostle for the election in 2016.

And the he's banking on the stupid Social Weather Station to provide the impetus to the millions of gullible Filipinos who bank on superficial information as their main source of information.