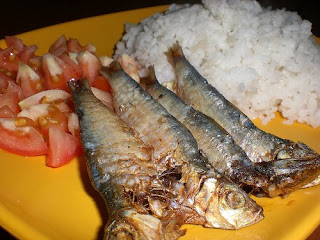 Some nuns filed a lawsuit against a Filipino couple in New York City over the lowly tuyo (dried fish).

For the information of those that don't know, tuyo is a staple food for the Filipino. It is fish (of any kind) that has been sun-dried over a few days and boy, does it smell bad. Despite the stench, the taste is delectable. The usual tuyo is called anchovies by the American people. Except that the Americans don't fry it the way we do.

Fast forward. Some nuns living in the same apartment building as the Filipino couple filed a lawsuit (to the tune of $75,000) against the latter because they had smelled the stench and thought there was a dead body in the building. As to why the nuns were living in a high-rise apartment, your guess was as good as mine. Anyway, let's get back to the story. The nuns had called up the fire department and the firemen had searched the building. They noticed the stench coming from the apartment of the Lim couple that resided on the 16th floor. They knocked on the door and when no one came answering, they blazooned themselves into the room by knocking the door down. No dead body. Just the stench (to us, it is called aroma). And it was all because of frying tuyo!

Back in time. I remember when I was still living in Boston. I had come from a trip in Chicago where I spent a few days with friends. Raul's mom had brought me to the Filipino store there where she had bought me a few packs of tuyo and frozen longganiza and duck eggs. My mouth was watering for my taste for Filipino delicacies. OMG I was craving for it. After dropping me off at the train station, the 12 hour trip back to Boston seemed like forever. When I got back to my apartment, I took out the tuyo, prepared sinangag (fried rice) and duck eggs, onions and tomatoes and fried the tuyo. Then that was it. There was banging on my ceiling as the tenant on the upper floor begain to complain of "what was that horrible stench"? I opened all the windows, doused the frying pan with water and settled for a miserable American meal.

There are many ways we can look at this picture. It can be called a racist attitude on behalf of the nuns, or it can be selfishness on the side of the Pinoy couple (ahem, mea culpa). But the lowly tuyo, a staple food on the table of every Filipino, does not deserve the treatment it got from the nuns who lived near the Pinoy couple. It was an overboard reaction and I don't think the church is in this position to create an enemy among its followers. These nuns are supposed to be people who show more empathy towards fellow men, regardless of race, religion, or dietary preference.

I guess this just goes to show that Mother Teresa they are not! As for the lowly tuyo, the Filipinos will just need to contend with the fact that they need to give breathing space to their neighbors.

What strikes me is that many (I hate saying it, but I will because I will call a spade a spade) caucasians and other nationalities have body odor. Really a bad stench which strikes my nostrils and gives me migraine. I tell you, their body odor is worst than the smell of frying tuyo. It just so happens that they are so used to the smell that they don't consider it as stench. To them, it is a musky sexy smell. To me, it is body odor. Can we sue them for the stench they emanate on the street or being with them in the elevator or in the same room?

Argumentatively, let's just say that "one man's medicine is another man's poison". In short, what may be stench to me is aroma to you. Ironically, these nuns who preach the faith, should learn to practice it - love thy neighbor.