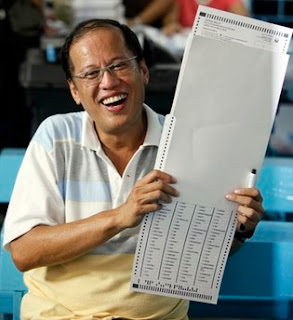 Yes, I voted first before preparing for my Tokyo trip. It was an obligation as Filipino citizen I wouldn't miss.

This election will go down in history as the FIRST automated election (and hopefully all will be automated from hereon) in the Philippines.

First, let's talk about the automated election. While there are close to 100,000 whiners on the procedure of the election, this was the way to go. If you go by statistics, the complainants on the process of this election should try to understand two things: one is that not all things are expected to go right the first time around. Second is that of the over 50Million Filipino eligible voters, this number or about 0.5% of the voting population is a tiny proportion compared to those that lauded the automation procedure.

Sure the lines were long. This was expected due to the massive turn out of voters AND the consolidation of some precincts so that it could fit the 76,000 machines. Like I said, the process was good enough, but the implementation could be better the next time around.

Enough of the whining.

If there is one thing I laud Ate Glue, it is the fact that it is during her term that automating the elections became a reality. Hats off to her and goodbye. Enough said.

The very quick results as the final endpoint and outcome of the election puts all issues to rest. In 24 hours, we had already about 80% of the returns tallied and verified. Very minimal manual counting. No more waiting for 2 weeks to 2 years for final election returns. Minimal cheating. Why, even the election lawyers seemed to have no jobs for this election.

Some observations from friends and yours truly:
1. The demise of Cory Aquino last year paved the way for a more credible election in the sense that had she not passed away, Noynoy would not have run for president. And had Noynoy not run, well, the obvious is that Erap would return as our president. Dang!!!! Crap! You can never tell how these people think and it's so Filipino. Masochism at the highest degree!!! If Erap had won, we deserve the kind of corruption and greed in government.

2. We clamor for change. With that said, we were busy campaigning for the president and the vice-president. At the senatorial level, we see the old faces (and I mean old). We should have not voted for SOME (if not MANY) of the idiots that should not deserve seats in public office. I was flabbergasted that Lito Lapid, made it to the magic 12!!! Lito Lapid!! Lord help the Filipino people. It is no wonder that the country is in such dire need of more brains. Try to make sense out of common sense? We need a few human brains in public office and not those wherein cockroaches have larger brains than our public servants!!

3. Erap is running a distant second to front runner Noynoy. And he and his camp are whining that he's being cheated in this election. You can obviously see that this guy really is clingy. Can someone please give him a movie project so he can get out of politics? Maybe ABS-CBN can make Erap replace Willie Revillame. After all, they have the same penchant for multiple women.

4. Gordon is such a sourpuss. You can tell because he's complaining as to where Noynoy got the financial support. Darn! Well, for your information, I donated a good amount to the campaign of Noynoy. Any questions Dicky? Face it. Not everyone who posted Go Gordon in Facebook was a fan. As a matter of fact, you're one sore loser. So we didn't support you, so what's the big deal? To my friends who are Gordon fanatics, tsk tsk tsk, Dicky boy is asking where IS THE MONEY? Bakit hanggang Facebook lang daw kayo? Bow!

5. FB is a powerful tool. But 80% of the Pinoys live below the poverty line. Of these, 90% have not even heard of FB. Not even ALL the 20% of those that live above the poverty line are tech-driven. About 50% are techies. Mostly the youth. Which explains why Gibo was driven by fans on Facebook. But FB or Twitter or Friendster does not translate to votes. Many of those on FB are not even of legal age to VOTE.

6. Imagine how democracy works. There are 4 Marcoses that have won seats in government in the time of Aquino. Wow!!! Talk about a comeback. Leading the pack is BongBong Marcos who has won a senatorial seat!

7. The only contest left is the vice-presidential seat. Where Mar Roxas seemed to have the cat in the bag, so to speak, at the beginning of the campaign. But the endorsement of Chiz Escudero on the Noy-Bi tandem on the last few weeks of the campaign had apparently spelled the difference. There was a sudden barrage of balimbings and like a tectonic shift in the earth, the tide suddenly changed. And in the official count, Roxas has been trailing Binay. This has been the most perplexing phenomenon. What happened?

8. Those that did not vote because they were on "vacation or holiday", should shut up! They have no right to complain on anything that happens after this election. You snooze, you lose. You should be ashamed at claiming rights to bantering while enjoying yourselves. Shame shame shame!!! If my 73 year old mom braved the heat, crowd, and technology glitz because of her love for country, I don't see why some people could not postpone their trips to the US of A or anywhere else just because the trip was free or the tickets were dirt cheap at the time of booking or that their kids were whining to go on vacation and the parents felt so obligated to send them to Timbuktu. If your reason for not voting is because you were having a grand time somewhere else and expect to come home and join the party, you should really have a thick face on this kind of attitude. It's the kind that puts the country 10 steps backwards on the scale of progress.

History will treat us well. In the Philippines, the outcome of political events is unpredictable as its weather forecast.

As of this blog, the only one gracious in defeat is Manny Villar, who was the first to concede to Noynoy. Can everyone please just get a grip on reality? For the sore losers, concede. This country, no matter how insane the political system is, needs to move on.
Posted by Kid at heart at 6:38 PM