NAIA 1 - the window of poverty to the Philippines 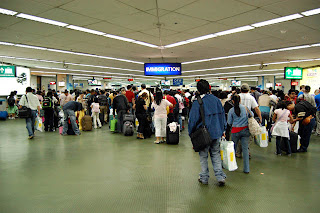 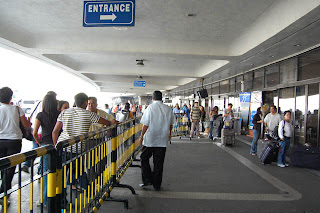 My flight from Tokyo touched down at NAIA 1 at exactly 1015pm. We were 30 minutes ahead of time. I was back in Manila. And I was sad.

Sad that I would see the dilapidated airport called Ninoy Aquino International Airport 1.

Dilapidated is an understatement.

From the current existing condition of NAIA 1, I do not understand why we insist on using this as the showcase of our country. Why in God's name was NAIA 3 ever built? NAIA 2 houses only Philippine Airlines, but PAL is a no fly zone for most of the international companies. It is a policy by many foreign multinational companies that speakers, delegates and representatives being sponsored by them for business trips DO NOT FLY on PAL because of the safety risks and after being downgraded by international aviation groups.

I blog about this because upon arrival at NAIA 1, the arrival and parking area is complete chaos. You have squeaky belts in a warm arrival area where even the toilet smells terrible. It's a dump! Let's face it!

When I got out of the airport, I went to where my driver was so that I could get home quick. Our car was blocked by several cars that were double parked and triple parked in front of us! We couldn't find the driver of one car, so I went to the security guards that were manning the gate of the parking area at the arrival zone. I gave the guard the plate number of the car and asked him to please page the owner.

Guess what? He told me to go to the paging area. It's not his job to page!

Watdfuk? So what was his job? Stand there and make his balls grow big? He was just standing there with two other guards and this girl from God knows where. They were watching the people go through the gate. That was it!

He told me that if I wanted to complain, I should go to the paging booth myself.

I told him it was his job, not mine. I pay for parking. That's the least he can do. I asked for his name. He flashed his name on my face. Said that his first name was Emil! And the other guard just snickered.

The girl beside them said that it was not their job to page and that it was my problem that there were cars double parked! Anak talaga ng tipaklong ang putah! I wanted to slap the bitch right there. I told her to shut the f*ck up. I wasn't talking to her. Unless she is the Queen of the Nile, she should not even be there.

I told the guards that this country has gone to the dogs. They wouldn't move until the whole crew of ABS-CBN and GMA and TV5 showed up. Would they want that? There's a new president-elect and gone are the days of the dwarf in the palace. If there's change they want, it should start with them. Pathetic people!

Then they kept quiet and said someone will go to the paging booth and asked for the plate number of the car. My driver was just beside me.

Infuriating is not an apt description for the idiots. Blowing my top was the least I wanted to do. But people like these, people who lead pathetic lives, people who get paid and yet do not want to do their job no matter how menial it may be, are the kind of people that will never ever have more successful and better lives.

They live in a world where our political system has made them comfortable and satisfied with the kind of lives they lead. They go back home to shanties, to their 8 children, because our government allows these idiots to exist.

That day, I was an ordinary citizen. I did not let my driver go around so he can pick me up. I wanted to just walk to the parking lot and go home. Just like every Juan de la Cruz. No fanfare. No help from immigration officials. No bodyguards. A simple Juan de la Cruz.

The crap that you get from NAIA 1 is the window to the world - on how proverbial poverty, greed, corruption and stupidity - has made the Philippines perennially a third world country.

I can never comprehend why we cannot break tradition where the whole barangay has to be there to greet oncoming arrivals. It's as if they will not have "pasalubongs" or will run out of it if they don't meet and greet their relatives.

I have never understood why we cannot shut down operations at NAIA 1 and move to NAIA 3 where parking is huge and the crowd is more controllable.

It will take a miracle for Noynoy to undo what other politicians have done to make us the showcase and definition of a pathetic race to the world!
Posted by Kid at heart at 6:53 PM

Pinoy In The City said...

Hi there...
I read your blog (and may I ask for permission to use some of your photos here in Terminal 1)...

The airport is also one of my biggest complaints here in the Philippines (first is the traffic jam).

I sure wish the government can do something about this. I am so so infuriated whenever I go to terminal 1.

Add to that the taxi drivers (if you try to ride one of them) would rip you off as much as they can.

But this is also a result of poverty. People there don't get paid enough. I think a lot didn't even get good education. Thus poor manners. The hell with Filipino values. They don't have it. As long as they get their measly payment.

thanks for reading the blog. i don't really know if there's anything we can do about this condition but it has got to stop and i'm sure you agree with me regarding this. go ahead and use the photos.

They're not using Naia 3 cause there's a pending case about its ownership. The builders of the airport claim that they haven't been fully compensated by the government. But again your main point is right. It's still the government's job to fix the airport system(along with a lot more problems)