No talent for Pilipinas Got Talent! 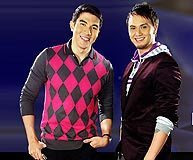 This started a few months ago on ABS-CBN. With a lackluster start, the shows three judges, Freddie Garcia, Kris Aquino and Ai-Ai de las Alas were unimpressive to me. The two hosts, Lucky Manzano and Billy Joe Crawford were like lovers in akimbo. In short, I didn't think that the local edition of this talent search would get anywhere.

But as the way Filipinos are, there will always be the spotlight to hog. And after a few weeks of watching people sing, dance, flex their muscles, eat bottles, play with fire, play musical instruments, do a magic act...I eventually got bored. The talents were far and few...

Last night, I chanced upon one of their semi-final episodes where the finalists would be based on the selection of sent in text voters and the judges as well. When the lovey dovey show hosts Luis (Lucky) and Billy announced who would leave the show, they requested the losers to stay on stage and approach them. Then the pathetic hosts asked the losers how they felt on losing!

Only in the Philippines!!!

Was there nothing else to discuss? Did you need to ask these questions? I mean sure they lost. They lost! That's it. Exit door please. Tadahhhhh!!! No more exit interviews! What were these two nincompoops thinking of?

Then the losers started to sob, cry, huhuhu, wail, and a valley of tears fell. Then the brainless Luis goes on the air saying, it's an emotional moment. Emotional moment my ass! I mean, gimme a break. I don't know where the brains of this Manzano kid came from, but believe me when I say that he has no hosting skills at all. My dog can do better at hosting. Like all people given a break in showbiz, the guy happens to be the son of Vilma Santos and Edu Manzano. That's it there is to it. No acting ability. No hosting ability. My gosh, I don't even know what ABS-CBN saw in him! He looks like someone with an identity crisis trying to pacify and magnify himself. I mean, he thanks Designer Whey for giving him his protein supplements for his bodybuilding! In one of the episodes, Luis removed his shirt just to show his BODY to another weight lifter who joined the contest to compare "notes". Narcissism is one of the biggest giveaways to homosexual identity crisis.

All the three losers would huddle together and the Mutt and Jeff team of Manzano and Crawford would capitalize on the sobbing spree and then keep muttering that it's an emotional moment for all. And then say that they're all winners and then the wailing would begin again. My goodness! What was the wailing all about? They should not even have this segment aired anymore!!!

What did these people think, that everyone would be a winner?

Every contest has a winner. A winner. Meaning ONE! And eventually the rest of the people lose the contest. Those who had major disabilities also went in to join this reality talent search. Did they expect people to look at their disability and cry them a river and vote them to win? Golly gee!! IF this is what these people thought, they should just go peddling in the street for loose change.

After last night, I was so disappointed with the Philippine version of the show that I felt that the franchisers of the show should sue ABS-CBN for the way the original talent search program was maligned. The judges were unbelievable and for the record, let me state that I don't think Kris Aquino has any credentials for choosing talent at all. Ai-Ai de las Alas may be one of the bigger stars of the network but she is not a sterling example of pure talent. Her comedy is all she has got. And the comments coming out the mouth of these two women judges are - darn - "friendship"!!!! Then the tandem of Mutt and Jeff (Manzano and Crawford) are a sore eye to the show. They talk too much especially that Manzano boy who seems to want to hog the limelights out of the talents.

If this talent search is full of bad talents from the judges to the hosts, then what kind of talents do we expect to come out of the show Pilipinas Got Talent?

After this season - lights out for this talent show!
Posted by Kid at heart at 2:10 PM