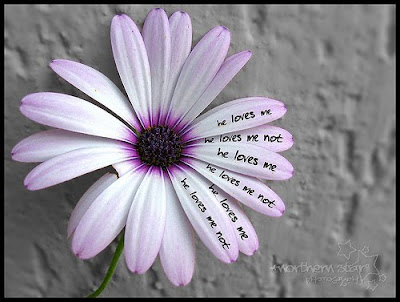 It is said that falling in love is the greatest feeling in the world.

What happens when that feeling is gone?

A friend of mine posted this question to me the other day. Everyone thought that they were such a happy and enviable couple. Both had good professional careers and were financially stable.

No there was no third party. Like all couples, they started off with so much deep affection for one another. While there was a disparity in their careers, likes and dislikes, and their sets of friends, they were at home with each other. They enjoyed good food and good times together.

It was sad to find out that over the years, their relationship took a roller coaster ride. There was no physical abuse but the emotional abuse seemed to be taking a toll on what looked like a one-sided relationship. My friend described that over the past months the weekends they spent together as "quiet and empty". It was like having dinner with a stranger. There were no stories, no discussions, nothing was talked about. There was no more anticipation on the part of his partner and the meetings became rote and routine. After so many years of being together, there seemed to be unhappiness written all over.

All relationships are lopsided. No one can truly love another with equality. One person will definitely love his partner more. But it doesn't mean that they don't love each other. Just not equally I guess.

Here was my friend, in love, and yet lonely in the relationship.

I told him that he was probably in an abusive relationship. He needed to take control of his life and that they are most likely together because they just needed an emotional anchor for one another. Something that isn't healthy. What's the point in being together if one cannot enjoy each others company? While it's altogether not about the sex alone, a relationship must have a deeper meaning than just being in the company of someone out of need.

He said that while he wanted to raise the issue with his lover, his lover hated discussing miserable topics. So they would just resume dinners in silence.

What drives one to drift away from love?

I have no answer to this. Perhaps it's because one is tired of being taken for granted. Or maybe one is tired of being the one to run to only in times of need. We can always use the pathetic excuse of "living for today" or "living only once" that's why we need to enjoy the good times and the company of other people, but a couple will need to reconcile with their commitments to one another and respect the other person's feelings as well. When that respect is trampled upon one day at a time, one deed at a time, the relationship begins to erode on its own.

When two people decide on having a relationship, they need to be sympathetic with each others wants and needs. They need to sit down and agree on it and once the relationship has been established, they need to make the vow to commitment - better or worse, richer or poorer, in sickness and in health.

There is no room for "I" in a relationship because "WE" have committed to it.

I suggested that perhaps it would be good to have a "cooling off" period. Maybe time to reassess if they belonged together and would want to spend the rest of their lives with each other.

This was not the first time I sat down with my friend on the matter. This time, however, he was not teary-eyed when he was telling me his story.

This was a good sign. I know that closure is not far.

Soon, he will walk away from being lonely in love.
Posted by Kid at heart at 10:38 AM