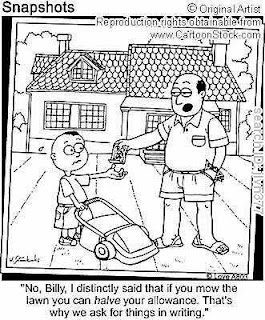 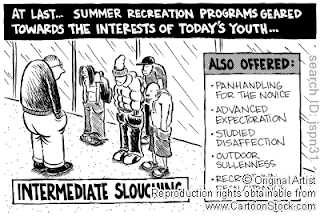 The other day at the gym the topic among some of the parents was whether it would be best to make their grown-up kids get a summer job or have a summer vacation.

The other day in the news was the government offering summer jobs for students who wanted to make extra money and get immersed in something worthwhile to do during the 2 months break from school. A couple of youngsters who were interviewed were elated by the fact that they would be earning on the side during the summer break.

I remember that when I was fresh off high school, I found the summer really boring. It was either to the beaches during the weekend or on weekdays I'd get on my racer bike and just spend the day pedaling away around the city or a nearby province.

My uncle's family usually had their summer vacation in Baguio. They would hie off during the warm months to a cooler place up north. And because my dad had to work 6 days a week, we did not have the luxury of going on extended vacations. Which meant that we were limited to Sunday at some beach in Cavite or Batangas and the rest of the week to watching television or just having to while the summer away.

Those were the days when there was no internet, PSP, mobile phones, DS Lite; movie houses were scarce and not in 3D, shopping malls were simply supermarkets and limited to SM and Virra Mall; theme parks (Splash Island, Manila Oceanarium, Enchanted Kingdom) were not even on the drawing board; there was no Cebu Pacific and vacationing in Palawan or Boracay or Bohol or Cagayan de Oro was not a tourist destination; there was no cable TV or iPod and that the most one had of music collections was a cassette player with a headset that looked like we were Martians!

Let's face it, today's generation has the luxury and advantage of not getting too bored each summer.

The summer right after high school, I wanted to do something different - than just ride my racer bike the whole week. My dad had asked my uncle if I could do some work for him in his hardware store (YES THERE WAS STILL NO HOME DEPOT THOSE DAYS, TOO. SO I'M ANCIENT - SHOOT ME!). My uncle acceded. At least someone he can trust can watch his store when they are on their annual "summer holiday" (much to my envy of course). When my dad talked to me about it, I instantly said yes.

The summer right after high school, I had my taste of a "job". I was the cashier for the hardware store my uncle owned. The first week was confusing. I was wondering what all those codes meant on the items that were being sold. But I was a quick learner. Aside from handling the cash register, the second week became a breeze. I was mingling with the sales clerks and I knew that the codes meant the actual price of the goods being sold. Which meant that when the customer haggled with the cost, I could give it to him at a lower price as long as I did not go beyond 20% of the actual acquisition cost. How would I know the acquisition cost? It's in the code. For example, BLACKWHITE stood for the digits 1234567890. If the SRP (suggested retail price) for item XXX was 178.00/pc and the code was BAK, the actual cost of the goods was P135. All I needed were my fingers for remembering the code! Fantastic!

By the third week I was adept at the haggling that went on at the busy shop and I looked forward to getting up early to go to "work". At the end of the month I would get my pay envelope and my eyes widened at the extra money I had earned for a month's work! I was rich in my own world. My parents made me keep the money and believe me when I say that I refused to spend a single centavo even for something that I was dreaming to buy the earnings with. To me, everything that I wanted to buy seemed suddenly expensive.

After that summer, I looked forward to all the summer vacations to come. The first job experience was exhilarating not to mention that I couldn't imagine what material benefit lied ahead if I finished college.

I started college on the track of going to medical school. It got aborted when I decided to shift to get a mathematics degree during my second year in college. I think it was the fact that medical school would still take gazillion years before I would earn my first legal pay that I decided to get a career in mathematics and then shift to actuarial science later on. When my dad found out that I shifted course, he insisted that I still take the entrance exams to med school. Which thwarted my initial employment career back to the boring corpses and biochemical jargon that looked like the world of schizophrenic brigades!

At least I made a bargain with dad. I would pursue my graduate school courses during the summer vacations because I was stressed with med school. Truth told, I hated the method of teaching in med school. The teachers were obsolete and it was pure memory work. I was bored and the challenge was just not there.

I saw another opportunity at earning when I was in the second year of my med school. I took the exam for the school newspaper - The Varsitarian. I had no writing skills at all. But it provided so much perks in terms of a stipend every 10 days and a partial scholarship if you became a staff member of the V. Aside from that was the opportunity to see your name in print, in the official student publication of the University of Santo Tomas! To this day, I don't know how I passed the exams, but I guess my writing skills weren't that bad. I rose from the ranks of a beat reporter to features writer to features editor to news editor and then to the board of editors at the end of my last year in med school.

And then I graduated from med school. Which started off my career in what I now call my profession - the doctor (BOW!).

And fast forward to the future.

Back at the gym, the ladies (and some guys) were chatting about the upcoming summer. School's out and the kids are restless. One of the mom's wanted her 15 year old son and 17 year old daughter to enroll in summer camp. The other mom wanted her 13 year old girl to join a cooking class for the summer (READ: JUNIOR CHEF). The other dad wanted his 16 year old son to join basketball camp. And there's this mom who wanted her 17 year old boy to learn fencing (REALLY!! GOSH YOU SHOULD SEE THE 235 POUND KID. HE'S LIKE THE BEST TARGET FOR FENCING! Jab anywhere with that fencing sabre and you'd nail him even a mile away!) The rest of the parents were huddled - tossing between sending their kids to the US or El Nido or Boracay or to Timbuktu (so awash in cash I guess).

I thought to myself - so this is the summer break for the rich (whatever!). Their kids work hard during the regular school days (sure sure...like they're really hard working) that the summer break should be fun fun fun!!! I guess that's the concept we imbibe on our youth. The sense of having to "work" and assume some "responsibility" does not seem to be in vocabulary or equation in the large majority.

I suggested to some of them to ask the maids to go home to the provinces for the summer break and make the kids do some household chores (and pay them for doing the chores). I got this violent reaction and you could see it seething through their eyes that they weren't too happy with making their kids muchachos and muchachas for the summer period. I could imagine some of the parents who agreed to the idea that once they broke the news to their kids the reaction of the kids would be one of abhorence, anger, defiance and "it's summer vacation mom!!! Our friends are in the beach getting a tan and we're going to work?!?!! What are we - poor??!?!?! and the drama continues. Bow!!! Clap clap clap for the dramatic household event of the year!). At the thought of the suggestion of having to make their kids (who are of age) to get a summer job or get paid doing some chores for the house during the summer was like suggesting Gaddaffi from stepping down from power in Libya.

The summer holiday, while time out from school, does not necessarily mean that it should be a time for "exploitation" for our kids (of age). But neither does it mean that the only exercise they get from sun up to sun down is bashing the keyboard of the computer and staring at FB or MySpace the whole day and being a couch potato while both parents are working their butts off so that they have money for matriculation the upcoming school year. While there is nothing wrong with being on a break and getting some rest under the coconut tree in some isolated (or even crowded) beach somewhere in never never land, getting exposed to "responsible work" has some benefits as well. Children begin to realize the learning experience on the value of money. It is not true that because they start "earning" a meager amount they lose interest in school. There is more learning experience in true life than in the classroom. It is also not true that children who are exposed to a working environment fall prey to bad company. I've always said it time and again that the weakest children who fall prey to scoundrels are those raised from dysfunctional families and that the families are to blame for their children going astray.

Now that summer's here - and that the cost of living seems to have escalated disproportionately the past few months (oil price hike, toll hike, tax hike) - what's your plan for your kids this summer - a job or vacation?


[Pictures from cartoonstock.com]
Posted by Kid at heart at 2:29 PM

Very well written. I am not one of the moms in the world so obviously I am the daughter who for now is taking rest from school. Am I? Well, if I were to be asked, I would say vacation. That's the obvious answer for teens like me.Hehe. Am so tired from studying so I guess a little break will do. Although, summer job is not bad if it means working with my friends, not so difficult job and a good cash for shopping eventually. Haha