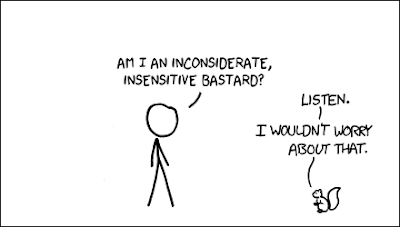 Let me thank a member of the country club I go to for being the subject of my blog today.

The title alone says it all. But I will let my readers be the judge of this.

Last Tuesday when I was working out, there's this guy (a member's dependent), let's call him A, who started working out quietly as well. Then his friend, let's call him B, popped in and started working out with him. After almost 30 minutes, A and B were still in the same work out space and hogging the equipments. Of course, it was taking them forever to finish. Not because they were concentrating on what they were doing. They were talking and chit chatting and checking their mobile phones for messages and replying to it in between. They were having very long conversations. And as my sweat was drying up, I casually walked up to one of them and asked, "are you finished?" That's when he picked up his towel and he and his friend moved to another spot, to another gym equipment and started their conversation again.

I let it pass. But it destroyed my work out routine. You know how it is when you've warmed up and are ready to lift a few weights. And then some inconsiderate person comes along to make the gym look like lover's lane.

Three days later, A is working out at the country club gym when I get there. He works out quietly and finishes some routine. Good. Then comes along another guy (I guess another friend?), let's call him C. This time, C just sits down on one of the equipments and yakkity yaks while A's working out. Every once in awhile, C would look at the large mirrors, smiles at himself and fixes his hair!!!!! Sanamagan, I wanted to slap C. He'd talk to A then face the mirror and pat his hair and arrange it and then smile at himself then talk again to A.

I called the attention of one the people at the gym to ask C to leave if he wasn't going to work out. He is, after all, occupying space. Unlike B, this guy was not dressed for the gym and was just keeping A company. The attendant had asked C if he was working out and if he was a member or a dependent of a member. C said he was not and was just a guest. And the attendant asked him to wait for A outside the gym area.

In a huff, A had stormed out of the gym and called his MOTHER!!!!!!

The mother wouldn't let it go and started huffing and puffing and arguing for around 30-40 minutes in the gym. The other members were wondering what the commotion was all about. When she left after 40 minutes, the FATHER of A had called by phone and demanded to talk to the attendant as well. He berated the attendant for the "shame" brought on his son because the attendant had asked his son's guest to step out and wait for him outside.

After the mother had left, I asked the supervisor and attendant what happened.

The staff had told me that the mother was argumentative and that she demanded to see rules and regulations of the club on usage of the gym, that she felt her son was being singled out and that there are other members that make "istambay" in the gym anyway and that she'd be monitoring everyone from here on (good!!!), and that members, their dependents and their guests shouldn't be treated like that because they pay!

My first instinct was to run after the mother and talk to her. Slap some sense into her. But the the father called and sided with the story of his son and wifey. I guess there's something very wrong with this family and let it go.

But the staff and supervisor informed me that they stood pat at my complaint. I was right and the rules and regulations were clearly posted at the wall of the gym. Some people just don't bother to read. I guess some parents send their kids to school but their kids end up being illiterate.

So if the parents happen to read this blog, let me inform you that club membership is a PRIVILEGE and not a RIGHT!

In short, while we are all stock holders of the club, we all pay our dues equally. Rules and regulations of the club are for all members, their dependents, and guests. Members are responsible for their dependents and their guests. Dependents enjoy a few perks until they reach the age of 25 (which is weird for this club. They should make the maximum dependency age 21). Guests who don't pay for the use of facilities must stay outside of the facility areas and wait for the members in common areas or public areas. And guests are the lowest form of animals on the planet of the club. Not only should they obey the rules and regulations but have no privilege at all.

One word describes this family - INCONSIDERATE!

This is a huge problem among many Pinoys. They think that when they are members, they own the country club. They think the world revolves around them. When your children are wrong, they are wrong. As parents we need to explain that. Instead of barging into the gym and looking for the culprit, the mother should have asked what happened first. Then asked for the club rules (didn't they read the membership brochure?). Then talked to her son or made her son face the attendant.

But no!!! She took it to a different level. She and everyone in her family showed true meaning to the word INCONSIDERATE!

Who did they think they were?!?!?!!? Maybe next time when the boy works out, the mother should make his son wear a tiara so that we know that the Queen of Sheeba has arrived and her royalty is acknowledged. WDTF!!!!!

I can't totally blame the son for being what he is (even if the think the guy is a toad). Apparently with the way the mother reacted, the boy comes from a family that teaches him to be inconsiderate, bad manners and wrong conduct, and that even wrong reasoning has a place in the sun as long as you have money. There is something wrong with this family and the parents need to get reoriented to the proper perspective on the do's and don'ts on club membership.

I don't care if their son needs another boy to hold his hand or flirt with him or even cavort with him while he's working out. But rules are rules. They were made so that we provide some order into chaos.

Even if having another boy around their son will provide inspiration to their son's workout, some people just need to be a little more considerate with others not only at the club but in our daily lives as well.

If you can't teach this to your kids, your family can just roll over and die for all I care.
Posted by Kid at heart at 10:37 AM