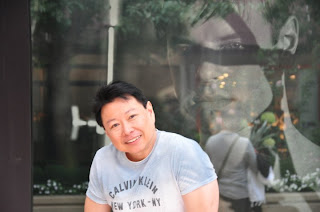 This is a first for this blog. And I'm blogging on this topic because it's an assignment for a religion class of my nephew who wanted to do an interview with me on being single.

Skeptically I agreed. After all, he was my nephew. And I love being interviewed.

When I opened my email, my skepticism was verified.

I talked to my nephew on the "constraints" I had with this interview, and him being my "confessional box". He replied saying it was alright and he would just tell his teacher that I was just crazy. I think he was desperate. It was not his desperation that drove me to accede to his request. It was the fact that he understood his uncle.

The first question was:

WHY DID YOU CHOOSE TO REMAIN SINGLE?

As soon as I read this, I fell off the floor. I would have died laughing so I phoned a friend - my sister. "Did my nephew want me to go on answering this interview questionnaire?" She replied, "just answer it as honestly as you would."

Alright. So I'm single because "I don't like being a lesbian?" [nothing against lesbians as some of the nicest lesbians are my best friends]. I mean, really now. "Because I don't like women as sex partners?" or let's just put it straightforward "because of my sexual orientation and that probably I don't really like vaginas and I can't imagine anyone coming out of it?" or in modern day parlance, the simplest answer I would have given would be, "eeewww!"

Singleness was a choice I made. Unlike some who choose to be single because of professional career (which is a lot of BS) or are unattractive and instead of finding a match (read Andrew E's song - HUMANAP KA NG PANGIT) they want to get hitched with Dingdong Dantes or some Greek god or have a calling to serve their religion, I am still single because gay marriage is an anathema in the Philippines.

ON MY CATHOLIC FAITH

Don't get me wrong. While I have a sexual orientation that is common worldwide (read GAY), my faith and Catholic religion is deeply rooted on solid ground. Although there was so much confusion in my adolescent years, I needed to be syntonic with my orientation. The confusion stemmed from trying to make sense of why God was providing the confusion or was it me? Then there's the family. I mean, let's get real. I am after all Chinese and the first born male, you don't just come out of the closet and tell your dad that, "hey dad, guess what, your son is gay!" I played it by ear. I guess, like all parents, they somehow knew. I outed myself to my mom first (they are more understanding I guess), but we kept the secret to ourselves. At first they didn't like the fact that I was friends with woosies and I could feel their embarrassment. So we kept it a family secret - like the army - Don't ask, Don't tell! - became the rule.

It was during these trying times of finding myself and finding solace in accepting my sexual orientation that I prayed the most. I needed a bit of sanity in my life. I didn't like the fact that I had to sneak in and out of the house in disguise. There needed to be closure to this for me to move on. Having to deal with a family deeply rooted in tradition was driving me bananas.

One morning I looked in the mirror and asked God if this was a test of my faith. On bended knees I talked to Him to lead me out of my confusion. He provided no answer but I took to heart that I probably should try dating the opposite sex. Maybe that was where the answer lied. Seriously, I am not unattractive. I had my share of girls having a crush on me (up to now) and boys finding me attractive (up to now as well). So I tried dating a few girls. One of them ended up proposing to me. I turned her down. She cried a bucket but I wasn't ready to give up my virginity. In fairness though, I ended up being best friends with many of these girls. We became BFFs instead of lovers.

As I drew close to 21, I was firm on my sexuality. I was out and discussed this with my parents. My mom cried a bucket. My dad was infuriated. But unlike some parents, my parents seemed to understand. They accepted me for who I was. They let it be. In the back of their minds though, they would be waiting for a miracle.

As for me, I knew that I had a calling - being singly blessed.

ON CAREER AND BEING SINGLE

To say that I breezed through all the challenges in life would be an understatement. Of course we have mountains that block our paths. I had mine.

There were days when my family was cash strapped. Then there was the time when my dad had a stroke. I mean, let's face it. Life after all is not a bed of roses. And no matter how we prepare for it, we can never prepare ourselves for the worse in our lives.

I needed to focus focus focus. There was no use crying over spilled milk and the hurdles of the events in life was simply a setback. During my fellowship training in Boston, I was at the lowest of my life. The training period kept me gazillion miles away from home. From the people I loved the most. From my family and friends. It was like a new beginning of being alone. There was always the temptation to make my loins get the better of me, but I needed to focus. I was there to learn. It was an opportunity to make life better. And only I can do that. Here I was with no one to lean on (remember, this was the early 90s where the mobile phone and chatting on the internet and Skype or FaceTime or other techie gadgets were still on the drawing board). Loneliness can be the biggest factor in driving someone to do something terribly wrong.

After the summer came fall, winter, spring and the seasons had gone by. When I finished my fellowship program, I was offered to stay on to practice and do research at the University Hospital in Boston University. With my dad ill, and my mom trying to make ends meet and my sister being widowed and having to raise two kids, it was a tough decision to come home. After all, I already had a life in Boston.

After two weeks mulling over my faith and destiny, I declined the offer. The month before I left Boston, I was in tears while I was packing all my things. I was coming home to something I had no idea where I would be 5 years from then. Was I making the right decision?

I was single. Perhaps this was what fate and destiny was all about. It was time to come home.

Do I regret being single? No.

Do I regret coming home? No.

Am I happy being single? Yes.

Chaim Potok said, "all beginnings are hard." And coming home was like starting from scratch. There would be days when you'd just be counting the spiderwebs in your clinic or count the number of times the lizard made noise on the ceiling.

Yet you know you're never alone in the road less traveled. There were friends that helped you along the way and I shall never forget them. To them, I owed my jumpstart from my practice. After all, I was the only certified clinical pharmacologist that trained in the US in the university. Truth be told, I needed the money. But I didn't want to beg. There was too much expenditure that I would need to work day and night to make ends meet. I accepted lectures left and right and was on a plane from the north end of the Philippines all the way to Sultan Kudarat!

A year and a half after my return, my father passed away in his sleep. And with the little that I had, my sister and I could only afford the simplest coffin. The wake was provided free by the Benedictine order. My father's family offered to pay for a more "presentable" coffin. I turned it down. My dad would have agreed. Whatever we had on our backs was what we'd take to our graves.

I was single. And I was now in charge.

And in charge of my life as well.

There was a road that took me home to care for my mom, my sister and my niece and nephew. This was all the family I had on my back. This was all I needed in my journey in life. After I buried my father, I promised myself that I would take care of who was left behind.

And so, I remained single. Devoting my time to my profession, other peoples lives, career and yes, taking care of my family. They would experience the luxury that I didn't have while I was growing up. There would be plenty food on the table. There would be no opportunity to beg or borrow.

The kids are all grown up now. They have finished college. Eight years ago, I found my partner whom I share my dreams of growing old together with (well, don't we all want a happy ending to the story?).

Do you have plans of getting married? To a woman, of course not. The miracle of my converting to heterosexual never happened and nobody every bothered to ask me the question ever again. To my partner, well that depends on whether same sex marriage will be allowed in this country or not. As of now, we're contented with the arrangement.


"ON BEING SINGLE FOR LIFE"

There is nothing wrong with being single. You get to spend most of what you make on yourself and have a lot more to spare.

But contentment is not in material things alone. There are times I wish I had a kid (or kids) of my own but I have no regrets in my choice of being single. It is never a calling. It is a choice one makes.

Perhaps in a few years more, I will be alone. I have even imagined the most morbid scenario of dying alone. So I have asked my family to make sure that I am cremated within 24 hours of my death.

Even in death, I will choose to remain single.