Bitching 101 - Between Pessimism and Sarcasm 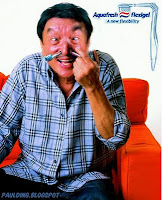 CBCP President, Bishop Nereo Odchimar issued a pastoral statement saying that "many serious questions about the reliability and integrity of the equipment and the personnel involved have not been satisfactorily answered." He suggested that the Comelec come up with fallback positions and scenarios. Dang these church people. Why are they so pessimistic? I cannot understand why they cannot be proactive! Instead of conjuring "apocalyptic predictions", can they not have a more positive outlook by joining in an information campaign effort for the upcoming automated polls? The problem with preaching from the pulpit is that you simply play mouthpiece without coming up with solutions to issues. For example, each parish church that has an LCD (of course they have laptops), should be able to come up with a prepared 5 minute video presentation to guide the people on how to vote during the upcoming computerized election. For those parishes that do not have, the sermons can be cut short (after all, you gotta agree with me that some of the sermons are actually nonsensical and out of the gospel reading). The priest can ask the lector to just read to the church goers the mechanics of how to fill out the ballot form using the automated method. It's a matter of being proactive. There is nothing worst than priests who condemn and cast the first stone.

As an example to the public, watch the video by the Sex Bomb Dancers created by GMA TV where a positive contribution can actually help educate (even the most uneducable, believe me this will catch on, especially the jologs):


Ompong, Willie and Villar. The King of Comedy (well once upon a time), has a 1 minute video commercial endorsing the candidacy of Manny Villar that's been airing on prime time television. Personalities and big names have been taking the plunge at the various candidates running for president in the upcoming 2010 elections. This is not unusual. In the US, Oprah Winfrey made the sales pitch for Barack Obama, which pushed the latter into the White House office a few months later. But the endorsers must be credible. Dolphy for all he is worth has been one of the prime movers of Philippine cinema. But alas, his family does not seem to fit the bill. Many of his kids and his grandchildren have been in various melee with the law - from murder raps to drug busts. While his personal life is no business of ours, one who carries that extra baggage in his back is unbelievable. Which goes to the point of Wowowee King Willie Revillame. The guy is an absolute jerk. But he seems to be able to charm the Pinoy crowd. Bastusan na kung bastusan sa show niya at parang manyak pag sumasayaw ang mga dancers niya, pero swak na swak ang dating kay lola na walang ginawa kundi umindak ng umindak parang naka droga! (Being lascivious on his show and acting like a maniac when the lady dancers are gyrating, even the grandmothers seem to enjoy and gyrate like drug addicts on his show). But Villar may just make it with this kind of company he runs around with. The Pinoys can actually relate to them.

Speaking of Kim Chiu, this girl is as thin as a reed. I normally don't watch noon time shows, but at ASAP yesterday, it was the first time I saw this scrawny looking girl, as this as a reed, as narrow as a scarecrow. If she got hit by a car (and I'm talking about a Cherry QQ), she'd be dead on impact with all those bones scattered 100 meters away. They should bring her to a doctor for a check up. Her "thinness" (if there is even such a word) is not a good role model for the Pinoys (unless we happen to be advertising malnutrition as our next slogan, she is picture perfect as poster girl for the malnourished people).

Medical Societies and Sponsors: It's that time of year when you see medical societies and medical organizations holding annual conventions left and right. I have no qualms on sponsorships. Naturally, the medical societies will ask (if not beg) for sponsorship. That means, moolah out of the pharmaceutical industry. Which means that they have to pass it on to consumers (read: drug price increase). But the government doesn't want the price increase (why not? Politics of course. The election is just around the corner. You cannot give away Philhealth benefits only. You gotta give away the Botika!!!). There's a 2 page advertisement on PDI today for the Foundation for Lay Education on Heart Diseases, Inc. There are ads by C-Lium Fibre, Memo Plus and Cor-30 (Aspirin). Not including the side bars involving Therapharma (a division of Unilab) for registration to the convention; Pfizer, Pascual and Therapharma (again) for Publicity; Therapharma (again and again) for Audiovisuals; Folares (for the convention kits); Boehringer Ingelheim for Signage (darn, even this is at the expense of the drug company). This does not include the food that they partake and the luncheon symposia and other miscellaneous events. I am just using them as an example because they are the first in a multitude of organizing societies that will hold scientific sessions left and right this year. Nothing against scientific events to upgrade the brain capacity of the doctors. Can societies not function without having to ask for sponsorships from pharmaceutical companies so that they are not beholden to benefactors?
Posted by Kid at heart at 8:14 AM