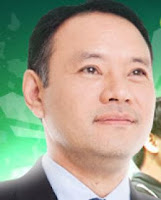 BITCH OF THE WEEK:


So the presidential race is finally on. And the gloves are finally off. The mudslinging has begun. Fact of the matter is - there are no qualified presidents.

Noynoy is the most inexperienced. He has moral ascendancy and that's it. Timid. Soft-spoken. But no concrete track record of a public executive in office. He carries with him the ghost of the Christmas past - Ninoy and Cory. And is being endorsed by sister Kris (who probably is not much of a worthy endorser considering the many bags her past has carried as well), and the Philippine Daily Inquirer, and Boy Abunda, and ABS-CBN, and Dingdong, and AiAi, and....

Gibo. What can I say about this La Sallite? While he has the brains and the background, he does not have the money to fund a campaign on his own. He definitely is getting a push from the Lakas-Kampi-NUCD camp. And we know that the Queen Dwarf in the Palace lords over this camp. She, who is lord of all evil, who has redefined the role of the devil and the deep blue sea, who has in her capacity changed the paradigm of evil and all its being, is actually funding Gibo's campaign. Remember the story of the man who sold his soul to the devil? In due time, Satan would demand payback. And I do not think the Queen Dwarf should be making a comeback as the next prime minister of this country. Nine years in hell is enough. Then again, some Filipinos are masochistic by nature. They just love the devil f*ck**g their souls.

Manny V. Oh my oh my how could you? When I saw the commercial of the "poor" children chanting to his tune that Manny V will deliver us from poverty, I wanted to throw my wine glass to the TV set. To me, that was the height of hipocrisy. Damn these idiots. Lord knows there is no quick fix to poverty. These b*llsh*t promises to end poverty are only for the dumb. But the promise sells. Look at where it got Erap. It is sad that the Pinoys believe that there is such a thing as deliverance from poverty.

Dick is the guy that's pulling our dick. While the blabbermouth makes some sense, his sense of politics is nepotistic at the very least. Megalomaniac in thinking, he thinks he is the guy that will convert the Philippines to becoming the next Singapore. While I admire him for his wanting to become the next Lee Kwan Yew, there just doesn't seem to have enough Chinese blood in a guy whose name ends with Gordon to make a case that what he has done for Subic can be done for the Philippines. Which means, considering that Subic is being run by the Gordons, so will the Philippines if and when Dick becomes president.

The other candidates? This is all the space I should give them on my blog. Eddie V should just ask God to intervene for him. If he truly has a calling, let God decide on that. But even God would not side with him. Otherwise, 6 years ago, God would have created a miracle by deciding to take the Queen Dwarf's life instead of FPJ. Jamby M. She should probably join a pilgrimage to Norway and go on exile. She has been a nuisance and I don't even know how she got voted into public office. Erap should just go to Korea where we can have an exchange program. Send the Koreans here to learn English and we send some Pinoys there to learn Korean. Maybe with a foreign language like this, he can learn to communicate better. Then there are the who? I don't know them and don't even plan to know them. Enough said.

"I still find each day too short for all the thoughts I want to think, all the walks I want to take, and all the friends I want to see. What is nice about life is that each day is never like the other. Life is beautiful. Enjoy it and throw all your troubles away...It is in being happy that makes life worth living."