Summer and the Stars 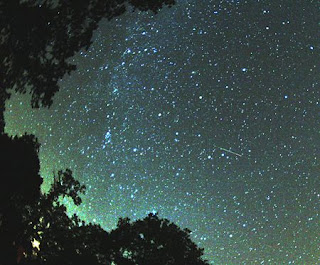 It's that time of the year when you know that summer is fast approaching.

Hot as it is outside, the asphalt pavements are all cracked up from the heat. But nothing beats the heat of the festive mood in the Philippines as summer approaches. Aside from the upcoming election, each summer brings back memories of youth.

I was not born with a silver spoon in my mouth. I was breastfed up to the age of 1. I never grew up with grandparents or relatives that were doting. And my parents were very young and hardly knew how to raise a child. Perhaps those are enough reasons why I am allowed to be a little bit crazy, a little bit weird, and dream a lot...

Unlike most children that looked forward to summer because their parents planned trips together with them, I faintly recalled my parents ever bringing us out for the 'summer holiday'.

While I and my sister were growing up, tatay was trying to make ends meet. Inang was busy trying to learn to be both a housewife and a mother. And my sister and I were left to imagining the sun, the seas, the stars.

During the summer, we would run outside the house looking for playmates and when we could not find any, we would run back to our rented apartment and put up the large blankets and play store. I had a fascination for delicatessens.

Dulcinea, a local patisserie, is much older than me. It was the swankiest pastry shop this side of town then. When tatay once took us to Dulcinea, I knew I fell in love not only with the delicious pastries but the elegance and the way it was served. They were all lined up in a huddle, and my little face was plastered on the glass display cabinet - craving at the cakes and smelling the aroma of coffee, churros and baked pastries. It was heaven on earth. And the crumpled 50 peso bill from tatay's old wallet would mean a special cake for his precious angels who stood beside him at the counter with their mouth watering for the eclair or churros or sansrival...Tatay would remind us that then the 50 pesos was all he made from the week of selling shoes in the sweltering summer heat. But today, it would be spent watching his two children gobble up the sweet pastries. And that would leave a smile on his tired face.

Back at home, the summers of my childhood would be a world of make believe. My sister and I would use plastic poker chips used by my parents for mahjong and the mahjong tablets and domino tablets as make-believe pastries. The other toys we had, we assembled altogether and would play store the whole day - imagining our own little Dulcineas in our lives...

During the later part of high school and my early college years, each Lenten season heralded summer. That was as far as I could remember. As long as it was lent, it was summer. And the summer escapades now grew to a drive to Los Banos to soak in the hot springs or to a beach in Cavite, to frolic in the sand and sun. Both my sister and I were always excited when it was summer time, as it gave us the opportunity to travel...outside the confines of our home, and the city. Again, unlike most families that spent "quality time" bonding together, spending overnight vacations out of town or out of the country, my parents always reminded us to be frugal. And that we needed to save and scrimp because after the summer sun, came the rainy season.

They did not mean that literally. As a figure of speech, I guess both of them always referred to the fact that right after the summer vacation, it was enrollment time again. And since both I and my sister went to exclusive schools in the city, we really needed the money. There were times when I would reuse the same set of pants or shirt or socks for two school years so that my parents could send us to a good school.

College was different. Tatay had better pay and while his income was now regular, he wanted to build a house. Which meant that we would be scrimping again. Tatay had a dream and he talked about it at the dinner table every night. I have never seen him that excited. We would have a house of our own now. No more renting he would say. He needed to borrow money. And after 10 years of amortization, the house would be ours, he would exclaim. He hired an architect, brought home the plans, and our family of 4 would pore over the blueprints and began to dream.

He then bought a lot. In January of 1975 the construction of the house began. No feng shui dates. Right after Christmas of 1974 we watched them dig a hole in the lot. And brick by brick, stone by stone, it rose. Every weekend, tatay would drive us to the construction site and we would see how much work and sacrifice had gone to watching our dream come to be.

That summer, I began to work at my uncle's hardware store. I was the cashier for his store, while his whole family would take a week vacation in the summer capital, Baguio. And while I envied my cousins who enjoyed each summer on weekly or monthly holidays while I took care of their store, I saw the fruits of my dad's dream come to fruition. In August of 1975, we had moved to our new home.

For the next four summers, I would spend my summers working at my uncle's hardware for a little more cash to save...for those rainy days and those little wants and desires.

Life after the house that was built during the summer of 1975 would never be the same again.

Today, my mom and I still live in the house that tatay built...it has undergone two renovations over the years since tatay passed away in 1994, exactly 9 days after my birthday.

Even though the house is old, it has stood the test of time. When tatay passed away, I told Inang that I would buy us a new home and that we would move on. We had ventured on seeing several other houses, townhouses and condominiums over the past years. But on solid ground of true love and sacrifice our old house stood. And so we continued renovating it. It will probably not set us free. Not yet.

To me, it is home. Where once upon a time in the summers of our lives, a young boy grew up to dream of the stars...
Posted by Kid at heart at 1:42 PM