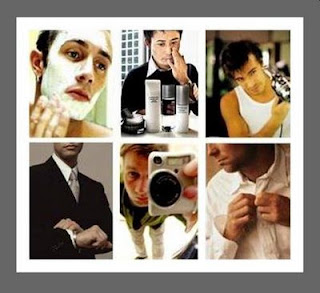 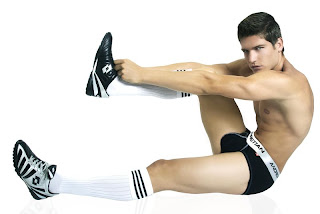 metrosexual (met.roh.SEK.shoo.ul) n. An urban male with a strong aesthetic sense who spends a great deal of time and money on his appearance and lifestyle.
—metrosexuality n.

You hear this word around town and in the fashion circle. Perhaps a fad or a clique or just a commercialism hype? The latter never ends with the fashion and beauty industry trying to sell a product, why not sell the concept of a "man not afraid to face his feminine side" and dub it as a metropolitan dude whose actions are more akin to grooming habits of homosexuals?

Historically, British author and journalist Mark Simpson (www.marksimpson.com), the 'father' of metrosexual, retrosexual, and spawner of sporno was interestingly initially cited in The Independent, a British publication:

The promotion of metrosexuality was left to the men's style press, magazines such as The Face, GQ, Esquire, Arena and FHM, the new media which took off in the Eighties and is still growing (GQ gains 10,000 new readers every month). They filled their magazines with images of narcissistic young men sporting fashionable clothes and accessories. And they persuaded other young men to study them with a mixture of envy and desire.
Some people said unkind things. American GQ, for example, was popularly dubbed ''Gay Quarterly''. Little wonder that all these magazines — with the possible exception of The Face — address their metrosexual readership as if none of them were homosexual or even bisexual.
—Mark Simpson, "Here come the mirror men," The Independent, November 15, 1994

Football star David Beckham in 2002, later became the poster boy (or should I say, whipping boy), for the subsequent commercialism of the metrosexual man. Many, including I, believe that the concept was born out of commercial exploitation of the male homosexual who is confused with his identity - hence, the term - metrosexual.


The typical metrosexual is a young man with money to spend, living in or within easy reach of a metropolis — because that's where all the best shops, clubs, gyms and hairdressers are. He might be officially gay, straight or bisexual, but this is utterly immaterial because he has clearly taken himself as his own love object and pleasure as his sexual preference. Particular professions, such as modeling, waiting tables, media, pop music and, nowadays, sport, seem to attract them but, truth be told, like male vanity products and herpes, they're pretty much everywhere.
—Mark Simpson, "Meet the metrosexual," Salon.com, July 22, 2002

Argumentatively, there is NO SUCH A THING AS A METROSEXUAL. The narcissistic affront of the male sexuality can be left to the human male being the macho-on-the-go. I think (and the girls do too), that it's sexy to have the guy flex his machismo side. NOT the well-sculpted pecs, delts, abs and arms rolled around a super tightly hugging shirt that scoops so low in front that the guy's tits are showing his cleaves (darn I thought that only women would look really sexy showing off those bumpers), but the real brute non-aesthetically made up look.

Once upon a time, a guy would swagger his pheromones based on his machismo image rather than the amount of Shu Uemura or Laura Mercier or Kiehl lines plastered all over his face. And there's the rub. Today, you have endorsers of "male beauty products" showing off their machismo side with all these foundation powders and supposedly male eyeliners, and male glossy lips and you've got the "men" queued up good at the cosmetic corners at the shopping malls. Truth be told, there are times when I want to tell the guy buying the foundation that he doesn't actually need it - what he needs is plastic surgery.

The gay population is a growing breed. I see a lot of would-be gay boys logarithmically expanding in numbers in the next decade. If you saw the Lady Gaga concert in Manila last year, the Araneta Coliseum was practically packed with young gay Pinoys aged 21 and below. And I was just counting the male homosexuals.

There is the screaming faggot, the repressed gay man, the macho gay, the tranvestite, the transexual and a garden variety of categories among the gay population. However you call them or dress them, their sexual orientation is geared towards same sex.

They are men in love and have sex with men.

Alexa Hackbarth in the Washington Post describes her concept of the metrosexual man:

At dinner the other night, my date listed the calorie count of the main entrees, raising an eyebrow at my chicken Alfredo selection after he had ordered a salad. I saw him check his reflection in the silver water pitcher three times. During dessert, he looked deeply into my eyes and told me he thought what we have together is very special. It was our third date.

It was then that I realized why my dating life has been as mysterious as the Bermuda Triangle since I arrived in Washington. This city, unlike any other place I've lived, is a haven for the metrosexual. A metrosexual, in case you didn't catch any of several newspaper articles about this developing phenomenon (or the recent "South Park" episode on Comedy Central), is a straight man who styles his hair using three different products (and actually calls them "products"), loves clothes and the very act of shopping for them, and describes himself as sensitive and romantic. In other words, he is a man who seems stereotypically gay except when it comes to sexual orientation.
—Alexa Hackbarth, "Vanity, Thy Name Is Metrosexual," The Washington Post, November 17, 2003

And as fantasy riddled as the vampires and werewolves in the Twilight series, if I may add, enigmatically emboldens the male to now hide his sexual orientation to women (albeit, foot them) by claiming metrosexuality.

No, I am not going to bash the metrosexual cult. Just an eye opener to the ladies who think they're dating a real man.

Think for a moment:
- the guy has nails so well manicured (and at times colored pink or violet or black) that it makes your magenta red coloring look like your nails were done in some lonely beauty parlor by Madam Auring
- you're having dinner with your new date and he comes sashaying into the restaurant wearing a tight fitting burgundy Armani t-shirt showing his well toned biceps and pectoralis major and minor, a hip hugging low waist Relay jeans wrapped around by an accenting Armani belt with a buckle that screams the logo; his slick black mane highlighted with whisps of blond coloring on the side; he smells better than you with his whiff of Calvin Klein One Summer Scent; and oh yeah, accessories by handbag by Gucci with shoes and socks to match; and all you came in was some dress you got on sale at The Black Shop, shoes and bag and accessories by Celine.
- when he suddenly drops his "purse" in the movie house, you notice that Shu Uemura and Laura Mercier are part of his make-up kit tucked neatly in the bag
- that his celphone has bling blings hanging at the end
- that he talks to you about going shopping for clothes in the gayest of all shops, picking out the shortest, kinkiest, sexiest and wildest underwear even if each pair costs P500 each
- that he has a penchant for matching his clothes to the color of his watch (purple shirt, purple watch, purple contact lens)
- that his ideal date with you is both of you getting a facial at Rustan's and a body scrub at the Spa
- that he admires it when not only women stare at him, but men as well
- that he has adoring looks at what other men wear and how they wear their clothes and compares himself with them ("Look hon, what nice biceps that guy standing in the corner has and I love the way he wears his jeans so low at the crotch, I wonder if I will look good as well in that? Where did the guy get those clothes? Damn they look hot on him!")
- that whenever you're out shopping, he's probably at the men's underwear section checking out the newest styles or at some Bench, Jockey or CK underwear shop, checking the latest merchandine
- that his netbook and his mobile phone are adorned with stickers and various protectors and he loves to hang out at wifi free stations showing off his gadgets and comparatively oogling at the men in the crowd
- that one look at his room and you notice that he's not only spic and span, but he has a room that would make the Queen of Sheeba shrink in envy at the amount of decorations and the design that was spent in garnishing the place
- that when it comes to making a fashion statement, he is so up-to-date that it would make Tim Yap look trampy and you look like his servant (or better yet - Maid!)
- that his pet dog is a Chihuahua or a Rotweiller?!?!?
- that he owns his very own compact mirror, which he carries 24/7 in his, where else but his clutch bag?

Vanity for vanity sake has a limit. Even our narcissistic egos can only go so far. Anything more flamboyant than being what your sexuality declares is a bit weird and coming up with the metrosexual term is but a pathetic excuse for men who in reality want men or so to put it bluntly are actually gay but hide under the guide of metrosexuality.
Posted by Kid at heart at 11:02 AM

I've been surfing online greater than three hours these days, yet I
by no means discovered any fascinating article like yours.

It's lovely value enough for me. In my opinion, if all
site owners and bloggers made good content material as you probably
did, the net might be a lot more useful than ever
before.