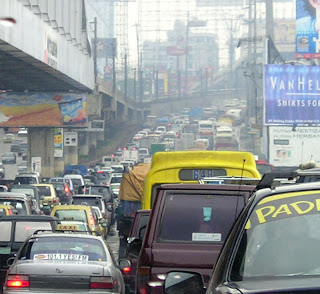 For the past two weeks, I have been giving lectures either for a postgraduate course or a medical society. The travel from my house or any place of origin to the lecture venue has been, for choice of a better word, STRESSFUL.


From the Magallanes area, my travel to the Philippine Heart Center took me 2 hrs and 15 mins. From C5 to Tiendesitas, for the Pasig Medical Society's lecture, it also took me 2 hrs. It took longer to traverse EDSA or C5 than a plane ride from Manila to Hong Kong or Davao. The travel time was close to going to Saigon!

If you live in Manila, you need to really extend your patience...and this is a virtue I sorely lack. Believe me when I say that I understand what road rage is all about, but yes, there is no reason for one to drive in Metro Manila if one is hot tempered.

I probably will never understand how government officials in our country think. Perhaps for lack of a more appropriate word, my observations during these long road trips traversing less than 15 km for 2 hours had me deducing that the better, kinder and gentler term to call those responsible for traffic in Metro Manila - STUPID!

1. It's 5 pm and the buses that traverse EDSA are not even half full. I was telling my driver how many buses there are on the right lane and how empty many of them were. All the people are queuing at the MRT stations and the buses are just lazily jockeying for the few passengers. Why can we not reduce the number of buses plying EDSA and put a certain time clock for those going to Monumento or Novaliches or Project 4 or wherever their final destination is? And these passengers are willing to travel 2-3 hours? What the? They have nothing to do with their lives rather than sit in a f*ck*ng bus the whole day and inhaling all that pollution? Dang! There has got to be some order put on the roads. The Philippines is one of the countries in the world with the highest road accidents - both fatal and nonfatal! And our government officials simply lack the balls to implement what is the overall good of the people. They will listen to Claire de la Fuente and her gang of bus owners that the jobs will be lost if they cut down on the buses on EDSA. Diyos mio! What about the lost time and among the greater majority who travel from North to South and vice versa? Vaya con Dios na lang ba?

2. Then you add the several thousands of motorcycles that ride shotgun and gungho along EDSA as well - swerving in and around the cars and our having to avoid them so as not to get into an accident. Once these motorcycles hit your car, they'll run away and you'll never even see their tiny plate numbers (which are not even lighted at night). There goes your car and there you can only curse to high heavens. Whoever allowed these imbeciles to ply the streets of Metro Manila without a care in the world about someone else's vehicle, I will never know. But I only pray and hope that he or she rolls over and dies - now!

3. On my way to Tiendesitas, I noticed that there are several elevated pedestrian walkways along C5. Of course, while there are warnings in the middle of the road that you can eventually die from playing tag with the vehicles on the road, the people that live around the area will somehow take the shorter road - to death. And when you get into an accident, the driver of the vehicle is charged with homicide due to negligence. Negligence my ass! Eh bawal nga tumawid noh!

Why does the local government spend millions of pesos to build an elevated pedestrian lane connecting one squatters area to another squatters area? I really don't see the logic. They are squatters! They're not supposed to even be there in the first place. In the second place, none of them actually pay taxes to the government. They have no contribution whatsoever to the coffers of the government. Why waste taxpayers money to build the elevated pedestrian lane for them? Gosh! It does not take rocket science to realize how stupid these lawmakers think! Spend the money to relocate them! You look out of the palatial homes in Serendra and you will appreciate a perfect view of the squatters community!

I have a better suggestion. In all the practicality of PNoy and whatever his do good attitude is, he should just make a presidential decree that any driver that runs over someone who is jaywalking or who rides a public vehicle in the NO LOADING and UNLOADING zone will get a prize for running over these idiots. Beyond his no wang wangs on the road - like reward us with P100,000 per person that we send to the next world. Let's see if anyone is even willing to violate the law. And those vendors that criss-cross the streets peddling their water, cigarettes, biscuits, red bull or whatever - puhleez - get them out of the road! Someone told me that it would be a violation of human rights to have this decree. What right? Tell me, what right did we violate? The right to life? What about the driver's right to life? While avoiding these idiots who disobey traffic rules and regulations, we end up swerving and hitting our cars somewhere else and injuring ourselves and others. So who is responsible for our loss of life because some lame brained squatter darted from point A to point B and we tried to avoid having to run the idiot over?

While my driver is busy maneuvering the slow drive, I open the newspaper and get to read the column of Mon Tulfo in the Philippine Daily Inquirer. He wrote about Bong and Lilia Pineda, alleged jueteng operators in Pampanga. Of course, Tulfo was defending the husband and wife tandem and saying that according to them, jueteng (an illegal numbers small town lottery) provides jobs to close to 100,000 people and that Bong and Lilia readily provide financial support to many of the poor in need. So my heart bleeds out to them. But this is an idiotic frame of thinking considering that we have people like Tulfo who justify the means to an end that is immoral and a source of corruption! If this is the logic behind Tulfo and the Pinedas or other jueteng operators, well eat my ass - why don't we just make it legal? Let's also justify prostitution, smoking, selling illegal drugs, selling fake DVDs and replicated designer bags and all that crap as legal. After all, they will give the same reason - that it's a source of livelihood. Gosh, you can really smell stupidity a mile away and the fact that the Inquirer even has Tulfo as a columnist who writes something like this is unimaginably debasing for a newspaper of this caliber.

I guess the Filipinos in the Philippines will always be the Banana Republic we deserve to be, considering the idiots that not only work for the government, but the stupid ones who defend what is not only immorally but logically wrong.

There can be no ORDER in CHAOS! And we are heading for a major disaster at the rate we're not handling the situation on the traffic problem.

Only in the Philippines!

[Photo by rewshearer from trekearth.com]
Posted by Kid at heart at 6:40 PM