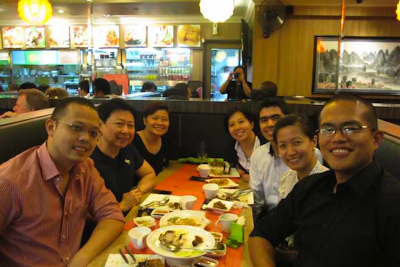 I was invited to speak at the Early Phase Clinical Trials Conference in Singapore.

Singapore is not new to me. Been there, done that. I guess it's one of the most frequently traveled countries on my list. In spite of the fact that I've been to the tiny country of 5 Million people that's bustling in prosperity and bursting out of it's economy gazillion times, Singapore has never ceased to amaze me.

I left Manila on SQ 917 at 210PM on a Tuesday. With a very tight schedule ahead, I was wondering how I would juggle my time there and get to work and play in my 24 hours stay in Singapore.

I arrived at 545PM at Terminal 3 (this was spanking new and they're building Terminal 4 now - geez where did the Philippines disappear to?), cleared immigration and got to the hotel at 630PM. Checked in, dropped my bags in the room and texted Marie that I arrived and would meet my former residents and students for dinner. I just needed to run to Orchard Road to get something. It was rush hour and I got to Ion Orchard at 715PM. Marie, Edmund, Miriam and Flei were already at Uniqlo waiting for me. After 30 minutes of quick shopping, we were off to Boon Tong Kee. Miriam had promised me the best Hainanese Chicken Rice in the world and I was hungry enough to eat.

This was one area of Singapore I have never been to. It's not a touristy area. The restaurant was located in an area of the city that tourists would not access readily. But the queue was long enough and Marie had made reservations so we didn't have to wait. Eventually, Braggy and Vince popped up to join us for dinner.

To say that dinner was great was an understatement. The food was fantastic and I loved everything that was served - from the Hainanese Chicken, Fried Chicken, Spareribs, Fried Tofu, Prawns (that were the size of my hand) cooked in cereal pork (I eventually named it Breadtalk Prawns because it's like the whole Prawn was cooked in Pork Floss just the like famous pork floss bread from Breadtalk) and of course, the rice! While gobbling on the food, my mind was thinking - where was I in all my trips to Singapore? How could I, a frequent traveler, have missed this place? But, yes, it takes a local Singaporean to find the best restaurants in the country. Forget about the Singapore Tatler's 100 best restaurant guides or the concierge at your hotel who makes a buck recommending a swanky place. Hands down, Boon Tong Kee was 5 stars and quadrillion miles away from the chic eateries on Marina Bay Sands! [Thank you Miriam for the dinner].

To say that dinner was fun was another understatement. It was time to catch up on each other. They were my students for God's sake. Which means that they kept calling me Dr. Co. Something that I was uneasy with. I guess it's the heirarchical tradition during medical school that leads us to address the oldies this way (sigh!). But the conversations had started with news about the UST Hospital and their training days there and how they compared the National University of Singapore's training (which had a wide disparity in both training, camaraderie and professionalism). Then it turned to a more relaxed atmosphere with gossiping about the shenanegans of even those wearing a cloak. This elicited so much laughter that we broke out in tears laughing out loud (I think the waitresses were looking at a bunch of crazy Filipinos who were on a day off from work). We talked and laughed for several hours, not minding the fact that they'd just kicked off from work and I just arrived from Manila and had to prepare for my talk the following day. We talked about life in Singapore, life in Manila, plans for the future and the reality that YES THERE IS A WORLD OUTSIDE OF THE UNIVERSITY OF SANTO TOMAS!

How time flew and after 4 hours of food, conversations and laughter, we decided to call it a night. They got me a cab and I got back to the hotel at 1045PM, reviewed my slide presentation and asked the operator to get me a wake up call for 6AM. I hit the sack past midnight.

After breakfast, I had a short meeting with JP from Proclin, a Contract Research Organization for clinical trials based in Singapore and Thailand. I headed straight to the 9AM conference and participated in the round table conference up to 10AM. I then gave a lecture at 11AM on the scenario of Early Phase Clinical Trials in the Philippines as why the country is ripe for the picking (or not!) as an Asia destination for Phase 1-3 clinical trials. After my talk at 1145AM, I was on the next cab back to the airport.

After checking in at 1220PM, I had lunch at a quaint Chinese Restaurant on Terminal 2. Roasted Duck and rice with a large cold lemon ice tea. I was facing the glass enclosure of the terminal building which overlooked the planes on the tarmac. I couldn't help but muse the conversations with my former students (and now colleagues). How time flew and how successful they were in their own rights.

It brought a smile to my face that knowing that as a mentor, they have come to the crossroad in life where they have grown to be mature, responsible doctors. I also realized that while I may be at the twilight of my professional career, I have been part of their lives. Somehow, that makes it worth the effort of having mentored them.

As the doors of SQ 916 at 210PM had closed for my flight back to Manila, I will always remember this 24 hours Singapore fling - where friends will always be the reason why anywhere we are, we will always find a home.

[Photo from Carmelo Braganza - and that's the waitress taking the pic at the mirror's reflection! If I had not thanked you guys enough, here's the blog dedicated to all of you.]
Posted by Kid at heart at 10:26 AM

Excellent write-up. I definitely appreciate this site.
Thanks!