The bystander and the complainant 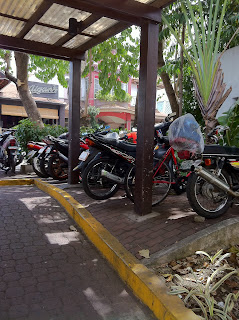 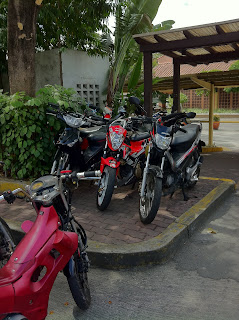 It's like clock work. More often than not, I reserve my Tuesdays for my mom.

A few years ago, we were at the Alabang Town Center mall. After lunch, we were talking about our upcoming vacation. She was holding on to my hand. Out of nowhere she suddenly tripped on an open wire that jutted out from the flooring of the mall. The mall has wires that jut out of the floor to provide lighting and other electrical access to the cart-wheel stores found in the middle of the mall alleys.

It was an unforgettable and unfortunate accident. My mom did a somersault that would put the cast of L'Cirque to shame. She landed head first and her bounced once on the tile-cemented flooring. What resulted was a concussion from the fall.

A colleague of mine was there and she rushed to help.

I asked the maid to go look for a security guard, who as usual, was nowhere around when you needed one.

It took awhile before the guard arrived and someone from the Healthway Clinic came in tow with a wheelchair.

We were brought to the mall's clinic where my mom was eventually examined. There was a big lump at the back of her head as as the area of trauma began to swell, I told the doctors there that I thought she should be brought to the emergency room of a hospital. We stabilized her blood pressure, which shot up due to the fall. When she was feeling a little less dizzy, I told the Healthway people that I was moving her to Asian Hospital for a CT Scan/MRI.

Initially, they didn't want us to leave until we settled the bill at Healthway. I became infuriated. In the first place, the accident would not have occurred if the mall owners/managers had made sure that the wiring connections on the floor had been sealed well! While the mall owners would like to earn more rent money from the open spaces, they should make sure that the wiring should be under the floor where it is hidden and will not cause accidents like these. But because it was cheaper to make "humps" on the floor rather than dig and and replace some flooring tiles, this is the result of their being cost-restrained. To make the long story short, I refused to pay and told them to go ahead and bill the mall owners. The receptionist at Healthway decided to call the administration office of the mall, but no one could take her call. They were on an excursion!

"Could you pay first and then go charge it to the mall later on?", the receptionist told me.

"No! Where in the world are these people? No one to take the complaint or act on this incident except the security guards?"

I did not want to argue further and because some of the doctors there were my students in medical school, they talked to the billing section and let us go.

I took the receipt, sent an incident report and a letter of complaint and the bill for the CT Scan/MRI to the mall.

While they did reimburse the ancillary procedure, it took them 2 weeks to do that.

So why do I blog about this incident?

A month ago, I noticed that the parking space of the Alabang Town Center was unusually crowded and as you can see in the photos, the sidewalks which were actually designed and built for handicapped and the disabled are now motorcycle parking. I called the attention of the lady security guard manning the door of the mall.

As usual, if you talk to people with less cerebral capacity you would get nowhere.

The lady guard argued that it was reserved parking for motorcycles. I argued back that it was not. It's a sidewalk. Not a parking space for motorcycles. The mere fact that there's a sign on the walk that clearly states it's for handicapped and disabled people mean that it's for people. NOT FOR MOTORCYCLES! There is a pay parking right beside. That is where motorcycles should park.

What surprised me was her ludicrous rebuttal. She said that most of the people who owned the motorcycles were employees of various merchandisers in the mall. They are poor and will not be able to afford daily parking fees of P20. She went on to say that with my attitude, I was undermining the poor!

I wanted to actually slap her right there and then. You can tell from the guard's argument that she was ranting about the travails of the poor. I hate it when people use poverty as an excuse for not following rules, regulations and laws. You can afford to buy a motorcycle, pay for gas and maintenance and registration, well I guess you can pay for parking as well. If these people have an issue about the parking fee, go complain to the administration like me!

Since we were getting nowhere, I told her to call the head of security or whoever was in-charge of the parking area. She told me to go their security office (and she pointed me in that direction).

I told her that i wanted to talk to the person in-charge right here and asked her to make him come here so that I could point to him what I was complaining about. I needed to visually show them what they drew on the pavement (the disabled sign) was not in congruence with the policy they were implementing. Besides, I was the customer! Gosh these people!!

Finally, the security head (or whoever the guy in-charge was) came and I explained to him the same argument I gave the lady guard. The guy I talked to said that he would do something about it.

It was a Tuesday and my mom and her yaya were in tow. My mom told me that I should stop arguing with people and stop complaining too much.

Over lunch, I told her:

"You see, that's what's wrong with people. You see something wrong and you let it go. You know it's not right and you shrug your shoulders. Until an accident happens. You remember what happened to you inside the mall a few years ago? This is another scenario where an accident is waiting to happen. I don't complain because I love to complain. Who in the world is insane enough to be just preoccupied with complaining? But when it's not right or there's something blatantly wrong, we need to take action even in the simplest way of opening our mouth. After all, it is only saliva that is lost here."

"I receive forwarded emails from friends and colleagues about being careful during these difficult times. The forwarded emails talk about being robbed in broad daylight or being harassed by officials and some punk simply trashes your car or belongings in front of other people. BUT THAT'S ALL WE DO. FORWARD THESE EMAILS! I have nothing against technology and the sharing of stories (which sometimes are downright scary or downright scripted to the point of being unbelievable). In all these forwarded emails, I have always wondered what the people whom we call bystanders (miron) actually did!"

"While I understand our skepticism in being good samaritans, we need to get out of the comfort zone of simply being bystanders. That's why nothing gets done because we're wimps. When we find something outrightly wrong, we need to speak up. We cannot be all bystanders. We need to make these changes even in own little way. We cannot be a passive people who simply sit back, relax and watch the world go by."


The other Tuesday, we had lunch again at the mall. My driver had parked in the same spot. And the motorcycles were still where they were one month ago. I called the attention of the roving guard but he just said that they'd do something about it. I decided there and then to go to the administration office. It was 1:00PM and why was not I surprised that the receptionist there told me "they're out to lunch and no one will be back until about 1:30PM" . So much for working for Ayala Malls where these people really take very very long lunches. I left my mobile number and told them to give me a text when the managers got back.

My mom and I had lunch and at about 2:15PM, I still didn't get a text. I guess they just wanted to forget about it. I went back to the administration office and they made me wait until about 2:35PM when two people came to talk to me. I told them my concern and showed them the pictures I captured on my iPhone. They appeared shock (or perhaps they've been nominated for best actor and actress in a supporting role for Ayala Malls). [Darn, it's right in their parking lot and they don't know?!?!?! Dang!!!]

It ended with a promise (promises are meant to be broken) that they'd do something about it. Soon?

I really don't know. But I promise that I will not stop until what is wrong has become right.

It is my own little way of not simply being a bystander!
Posted by Kid at heart at 8:05 AM