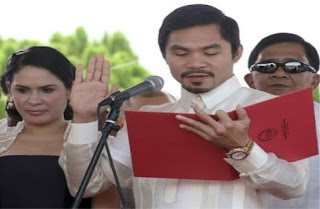 This saying is most personified in the boxing celebrity-cum Congressman of Saranggani - Manny Pacquiao.

Fine, he's a great boxer. There's no question about this. The guy has talent. In the boxing ring.

I've blogged about his rise from rags to riches. Including the saga of his mom - Aling Dionisia. (I refuse to call her Dona Dionisia, she doesn't deserve the title). CongMP (his name in his Twitter account) has brought accolades to the Philippines because of his boxing prowess. Then there are his charitable works as well. My hats off to him here.

But off the ring, I don't know what kind of unseen spirit had swooped upon the guy that he needed to run for Congressman in the district of Saranggani in General Santos. Alright, so the people of Saranggani had spoken. He won the election fair and square. And CongMP went to some form of crash course in political science or something to that effect in a school in Manila. The professors came out on television, praising Pacman for his being astute and a good student.

Just as he was beginning his political career, Pacman needed to take a leave of absence from his duty as an elected public official because of his fight match against Margarito Teves last November 13. His training days took him out of work as a pubic official. Understandably, with what he can legitimately make as a congressman is peanuts compared to what he can make in one fight. His winning the match against Teves had put him on a pedestal a notch higher.

After the match, congress went on a holiday break and so did Pacman.

The next time congress was in session he needed to take another leave of absence. This time to prepare for his match against Shane Mosley this coming May.

And during his promotional tour in the US and training in the Philippines, CongMP was always absent from Congress. But wait, here's the news. In spite of his absence, he tweets. Yes, he apparently has a Twitter account and announces his day to day progress and "news".

A Twitter follower of CongMP had inquired on why Pacman was always absent in congress and questions if he was fit to be a congressman considering the fact that he is never around for his duties as an elected public official.

This triggered a reply from CongMP with a tweet saying "itanong mo sa lolo mong panot" [ask your bald grandfather].

The following day, during the impeachment of embattled ombudsman Merci, Pacman was nowhere to be found. Training in Baguio, the guy didn't even have the balls to go to congress to make a milestone decision for and on behalf of his constituents. Instead, he tweeted that he votes for NO to the impeachment of Merci.

This sent a lot of people becoming irritated with the conduct of Pacman as a public official. And triggered him to closing his Twitter account.

It is sad that the people of Saranggani will have to bear with Pacman as their duly elected representative for 2 more years (he's been in office for a year already). Somebody is running the show as congressman in their district and it definitely is not Pacman.

Alright, so the guy has moolah and the guy is now dressed in all the designer suits money can buy. He has rubbed elbows and hobnobbed with the rich and famous. He has guested in the White House and maybe we can say that Barrack Obama is a fan [I have no idea what is in the mind of Obama but this is one president that seems to have periods of lucid intervals]. He has been on the cover of so many magazines including Time magazine. He has everything with respect to fame and fortune!

And as a boxer, I have no doubt on the skills of Pacman.

Etiquette and breeding is something that is learned through years of formation. It is not one that flows freely overnight just because you have money. Somewhere in between all that glaring cash, someone thought that it would change his personality and all that hillbilly attitude would be covered up with so much Rolex and gold and diamonds and dollars and cars.

True colors will always show during the most trying time. And Pacman has just shown his.

Question is, do the people of Saranggani and his rabid followers see his true colors or are blinded with the color of money?
Posted by Kid at heart at 9:13 AM