Fever is your friend 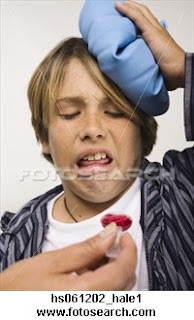 I remember a few years ago in one of the lectures of Dr. Sarah Long, former President of the Pediatric Infectious Diseases Society in the United States, emphasizing that "fever is your friend".

It was a simple message. In a nutshell, fever is the immune system's way of recognizing a foreign invasion on our body. Fever is a reaction from this invasion and is the body's defense on this foreign invasion.

The American Academy of Pediatrics recently published "Clinical Report: Fever and Antipyretic Use in Children", written by Janice E. Sullivan and Henry C. Farrar from the Section on Clinical Pharmacology and Therapeutics, and Committee on Drugs [Pediatrics, published online February 28, 2011]. I have time and again explained to my patients parents and guardians on why they should not unnecessarily panic when their children have fever and when to or not to give antipyretics.

Let me summarize the highlights of this report:

1. Appropriate fluid hydration is still the best treatment for fever. Fever results in insensible water losses. This includes a few electrolytes and water when patients have fever. Simply replacing these insensible water losses will not only help bring down the temperature of the patient but will help rehydrate them as well.

In short, when the patients have fever, it is important to take a lot of fluids.

2. "The desire to improve the overall comfort of the febrile child must be balanced against the desire to simply lower the body temperature." This is the most important factor that triggers the domino effect of panic among parents/guardians regarding fever in children. The psychological terror of "fever phobia" is taken out of context and the disproportionate reaction is more often than not due to myths and misconceptions on fever and its sequelae - seizures, brain damage, and death.

And the doctor is just as culpable in fanning the flames of undue panic by not providing education and being trigger happy in giving a prescription to patients with fever.

"It is argued that by creating undue concern over these presumed risks of fever, for which there is no clearly established relationship, physician are promoting an exaggerated desire in parents to achieve normothermia by aggressively treating fever in their children."

3. "There is NO EVIDENCE that reducing fever reduces morbidity or mortality from febrile illness. Possible exceptions to this could be children with underlying chronic diseases that may result in limited metabolic reserves or children who are critically ill, because these children may not tolerate the increased metabolic demands of fever."

4. "There is NO EVIDENCE that antipyretic therapy decreases the recurrence of febrile seizure."

5. Regarding immunization and fever, many pediatricians recommend either pretreatment with paracetamol or ibuprofen before immunization or immediately after immunization to minimize the discomfort associated with injections and minimize the febrile response. "...results of one recent study suggested the possibility of decreased immune response to vaccines in patients treated early with antipyretics." In addition, fever as an adverse reaction post-immunization accounts for only <10% of reactions. Putting patients at risk for adverse events from drugs being administered for no reason at all makes one wonder whether the benefits will actually outweigh the risks of giving drugs.

6. "Although the available literature is limited on the actual risks of fever and the benefits of antipyretic therapy, it is recognized that improvement in patient comfort is a reasonable therapeutic objective. Furthermore, at this time, there is no evidence that temperature reduction, in and of itself, should be the primary goal of antipyretic therapy."

7. Paracetamol (Acetaminophen) or Ibuprofen?
Once upon a time, salicylates was the drug of choice for fever. After sufficient data emerged associating salicylic acid (aspirin) and Reye syndrome (hepatic encephalopathy after aspirin administration with specific viral illnesses), paracetamol eventually replaced aspirin as the treatment of choice for fever. However, paracetamol is NOT without problems. Contrary to the endorsements of John Llyod Cruz regarding paracetamol being absolutely safe and seemingly taken like M&Ms for even minor aches and pain.

Paracetamol is the number one cause of drug-induced liver toxicity worldwide. Hepatotoxicity is most commonly seen in acute overdoses and the most common scenarios are in children receiving higher doses of paracetamol at intervals of less than 4 hours or around the clock!

"One safety concern is the effect of paracetamol on asthma-related symptoms; although asthma has also been associated with paracetamol use, causality has not been demonstrated."

Ibuprofen has gained popularity as an antipyretic. Ibuprofen is a non-steroidal anti-inflammatory drug (NSAID). It has very potent anti-inflammatory effect and is widely used for the treatment of rheumatologic problems. Its increasing use in managing fever is probably due to the longer clinical effect at lower doses than paracetamol.

"There is NO EVIDENCE to indicate that there is a difference in the safety of standard doses of ibuprofen compared to paracetamol in healthy children between 6 months to 12 years old with febrile illnesses". Like all NSAIDs, ibuprofen can cause gastritis, bleeding and ulcers of stomach duodenum and esophagus. Unlike paracetamol, ibuprofen has no evidence linking it to worsening of asthma symptoms.

Concern has been raised over the nephrotoxicity of ibuprofen. Because of the increasing reports of renal insufficiency in children treated with ibuprofen or other NSAIDs for febrile illnesses, caution is encouraged when using this drug in children who have fever with dehydration or with complex medical illnesses.

"Children who are at greatest risk of ibuprofen-related renal toxicity are those with dehydration, cardiovascular disease, preexisting renal disease, or the concomitant use of other nephrotoxic agents. Another potential group of risk is infants younger than 6 months because of the possibility of difference in ibuprofen pharmacokinetics and developmental differences in renal function...Another potential risk associated with the use of ibuprofen is the possible association between ibuprofen and varicella-related invasive group A streptococcal infection."

The management of fever is understanding why the patient is febrile. Parents/guardians must be made to understand that fever in itself is not known to endanger a generally healthy child. As I explained in the beginning, fever in itself may be beneficial to patients as it is an indicator that the body is fighting off a foreign intrusion into the immune system. The goal of antipyretic therapy is not to simply normalize body temperature but to improve the overall comfort and well-being of the patient. Hydration,education of parents/guardians on the use/misuse of antipyretics and diagnosing the actual cause of the fever by focusing on the other signs and symptoms accompanying the fever can help promote appropriate drug prescription in this vulnerable population.

After all, it is our duty as health care providers to FIRST DO NO HARM.
Posted by Kid at heart at 8:43 AM