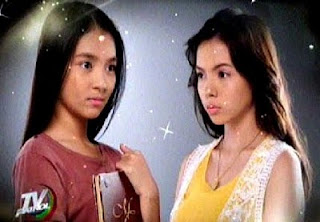 I got a text the other night asking me why Mara (from the Telenovela Mara Clara on ABS-CBN) died in the teleserye.

I texted back saying I had no idea!

So I rushed to my mom's room and asked her why and how the character Mara died. I was aghast because the maids (who were watching the series) were sobbing! Sobbing!!!

Then my mom talked about a love-hate relationship and who was jealous with whom and then a bomb being set off and Mara dying eventually.

I said, "well it's about time the characters get killed somehow. These telenovelas in the Philippines look like the stars and characters have super duper long lives. They get slapped, kicked, shot, stabbed, buried alive, hanged, castrated, raped, gang raped, and raped some more....and then they are run over, tortured, abused, hit, and killed over and over and over again...but there's still a happy ending. I remember a few years ago when I was watching a telenovela which had a good story line. Somewhere along the way the lead character died and I thought this was the ending. Well since it had run for almost 3 months, it was, I guess time to end the sob story. But because the ratings went well, the greedy TV networks decided that it should stay on. So they decided to resurrect the character."

Seriously, I have attempted several times to make sense out of these telenovelas. Which means, YES I attempt to watch some of them, especially those that seem to have a story to it. I really don't know if it's me or it's how pathetic the writers of these telenovelas make a short story seem like it can run forever and ever and ever in a land far far....very very very far away.

It gets tiring after awhile. I mean, let's face it. Even grade 1 students can tell a better story and these networks actually PAY these people to write? The theme is usual - boy meets girl, girl meets boy, they fall in love and a love triangle or quadrangle ensues. Then there should be the "contrabida". Who will not only maim and kill and slap slap slap slap the protagonist but the script is so craftily written to the point of giving new meaning to the word torture. With so much human rights abuse, I don't know how this gets tolerated by human rights advocates. Of course, religion will never escape the part. There should be a priest who is either Padre Damaso or who is kind, caring and then dead. And don't forget the cop. More often than not, there is a rogue cop and a circle of rogue politicians. Oh oh...there's always the bitch in tow. There is always the querida and the other woman or the boytoy or the macho dancer. The rich will always need to oppress the poor. The more oppression the better!

And the acting of some of the actors/actresses are not only terrible but downright shameful. Some shed clothes to the barest with no acting ability whatsoever. They cannot even deliver a line! Take the guy in Machete. He's as pathetic as it gets. Enough said.

My mom and the maids pass their time watching Korean, Taiwanese, Japanese, Spanish, and of course, Filipino telenovelas. If I gave my mom a pop quiz on these shows, she'd probably score 90 and the maids 100.

As to why and how these sagas last is beyond my comprehension. I guess we just need to cater to the basic things that the Pinoys like - and that's doing nothing in their spare time.

Someone has got to just go ahead and shoot the TV set.

By the way, the other night, the maids began clapping and screaming. I thought the dog did a swan dive with my cat.