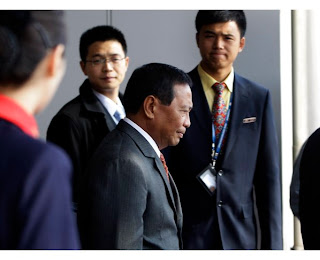 For the record, I am ambivalent about the death penalty.

Alright, so I don't have a stand with respect to this issue. But you will have to agree with me that there are circumstances when you feel that death by execution is so right and there are times when you think that it's so wrong.

There will be always two sides to an opinion and I have seen how divisive a religious conviction and belief is towards a moral issue. The RH (reproductive health) bill has created enemies from once upon a time friends because they took different stands in this brewing controversy.

If I am following the like of reasoning among pro-life advocates, then that means that all who are opposed to the reproductive health bill are also opposed to the death penalty. Life, after all, irregardless of whether it is a sperm and an ovum that will not be joined together because of a condom or some artificial barrier OR whether it is death by lethal injection no matter how grizzly the criminal act of the accused is, is still anti-life.

As we all know by now, the story of the 3 Filipino drug mules whose execution in China last February brought the country to a stand still with media focusing on their stories like a telenovela sob-story poor-boy/girl-needed-money-criminal act-justification rationalization. After some cause-oriented group (and there's always some groupie to that effect in this country, with media in particular) cried out of destitute to stay the death sentences of these Filipinos who were found guilty of drug trafficking in China, swath-buckling VP Jejomar Binay took the next flight out of Manila so that he can beg for pardon from the Chinese government on the execution. On Binay's return, the press had hailed his bravado because a proud Jejomon had stepped off the plane smiling proud that there was a stay on the execution.

The Chinese government, however, made it explicitly clear that it was not changing its mind. The execution would push through at some period in time. Jejomon had a ready reply to this - as long as we buy time, anything can happen and who knows, a miracle or divine intervention may change the landscape of things.

And as I was reviewing the events that lead to the execution of the 3 Filipinos, I could not help but feel...ambivalent.

Time and again, I have said that we cannot always use poverty as a reason for doing something wrong. Otherwise, with 75% of the Filipinos living in the Philippines living below the poverty line, we will have gazillion reasons to rationalize a criminal act.

So what can we do to minimize this? We need good governance and stamp our graft and corruption so that whatever resources are meant for the people are given to the people. We need to clean up the government's image first and foremost and punish those who use government and political connections in order to enrich themselves. And we cannot do that unless we send a clear message to those in public office that crime does not pay. Unfortunately, that is not the case scenario in this country. It will take more than PNoy to make this miraculous vision work, but today is a good beginning.

We need to make the Church understand that it cannot always meddle in politics. While there may be teachings and beliefs that are contradictory to what lawmakers may suggest, the benefits for the public must be weighed against the risks or ideologies. Ideologies do not get a country far. It becomes divisive and does not protect the greater majority from harm than good. While many religions preach from the various pulpits, they need to translate these teachings into more tangible education in changing the current practices or simple discipline to our people. We cannot keep saying NO because a noisy few are powerful enough to create the noise. We need to make sermons more relevant to the masses. And the various religions that are against death penalties and other government laws must be consistent in providing an alternative to a problem as well as making a stand not only in terms of their ideologies but against any harm to human life as well.

We need to teach discipline and responsibility across all classes of society. Easier said than done. But it's a start. That's why kids go to school. We need to educate them on what is right and what is wrong. How to cross the streets properly, why not to allow smoking even within campus and around campus, the need to fail when one does not cut the grade, why bullying is not acceptable, why falling in line is a rule everywhere and not only done in school, why we need to respect the Philippine flag...little things which must get cascaded and practiced at home as well! The problem here is that parents and relatives behave differently and this confuses the child who is growing up. Why is it that it's alright to cross the street anywhere without having to use the overpass and pedestrian lane when they're with their parents? You see this as a daily exercise in futility and you see the traffic enforcers busy catching number coding cars (because that's where they make a living) rather than instill discipline among pedestrians and public utility vehicles that ply the angry streets of Metro Manila (because they believe that they are their peers).

I commiserate with the family of the 3 Filipinos for execution in China this March 30. Like many other citizens worldwide who are at the throng of death because of crimes which they committed, I can only say that it is one's responsibility on how they live their lives. The government should not and cannot spend public funds meant for the development of its country and peoples in staying the execution by sending vice-presidents or other public officials to beg for clemency and mercy. If we will be doing this, there will be no end to the criminals and their families seeking for help from the government each time they commit a crime. We would have needlessly and recklessly spent public funds aimed at alleviating lives that are worth saving than letting these criminals go scot free.

I cannot understand why some sectors in media make a big issue about this execution. They write up their stories about being poor and taking on this criminal act because they come from poor families and wanted a better future for their families and themselves. Fine! Who doesn't? But trivializing this by making it seem like a sob story is irrational journalism! There are better stories to write about, without having to make a mistake a sensation!

There is a saying that when in Rome, do as the Romans do. It's why Filipinos who go to Singapore, Malaysia and other developed countries seem to more behaved and disciplined than those left behind in the Philippines.

I am quite sure that the 3 Filipino drug mules knew the risks they were taking when they brought in 10kg (that's heavier than a bowling ball) of cocaine into China. There are more drug mules (Filipinos or other nationalities) worldwide. And illegal drugs and drug trafficking is the reason why more lives are lost and destroyed. Like a disease, you need to cut the vector so that the patient does not get infected. If the death penalty is a way to dissuade a criminal act that results in more deaths, so be it. And while there are bleeding hearts that claim that the end does not justify the means, I can only say that they can take the saying and shove it up their a*s.

There are arguments for and against the death penalty. And while it is true that there may be SOME people who meet the death penalty but are innocent, there are those that are freed but they have committed a crime. The justice system is blind and the problem is not the punishment but how to make sure that we all get a fair shake at justice. You don't need to look far. See how the generals are being treated with kids gloves and the number of politicians that actually don't get convicted because they have the money for better lawyers or shady deals with the judicial system.