Family affair and the backdoor 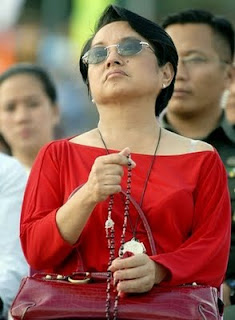 So what's wrong with all the politicians looking for a job in the government?

The more well entrenched they are, the harder it will be to get rid of them in the long run.

And that is the reality of Philippine Politics.

In the upcoming elections, there is a joke circulating that the Lower House (Congress) will be the House of Arroyos as Ate Glue makes a comeback, this time as congresswoman in the 2nd district of Pampanga. Her son, MIkey, will give up his current position for his mother (talk about mama's boy) and will run under a party list called Ang Galing Pinoy. Ironically this latter party list, represents the marginalized sector of security guards in the Philippines. Watdfuk is happening to this country?!?!!? Sanamagan banana republic!?!?!!?

The Comelec declined Ladlad, a party list that supposedly would represent the marginalized gay and lesbian sector of Philippine society. Fine! Whatever! The Comelec said they are not marginalized. Fine! Whatever! But to decline Ladlad and approve security guards as a marginalized sector, dang! Toink! Gadzooks! It makes me wanna puke big time! Will somebody please shoot the politicians? As in NOW?

I will not want to discuss this any further. I guess you can figure it out for yourself. Anyone to the defense can roll over and please, just die!

And so the party list system is the new backdoor for the exiting congressmen or administration candidates who still want to steal the thunder in the political gymnasium of the Philippines.

So presuming Ang Galing Pinoy wins in the upcoming election, then their nominee for congressman, Mikey A will become their representative. And that means that there will be more Arroyos in congress. Not counting her in-laws who are running for specific posts in their respective provinces as well.

But is Ate Glue all to blame?

In this banana republic, the political scenario is actually a family affair. It's a family business. Most of the luminaries in politics stay in politics. You can actually draw a family tree and mark those in the family tree who have political backgrounds! Children and grandchildren grow up wanting to become politicians - not to improve the plight of the Filipino people - but to make sure that the financial coffers in their generation continues to grow. And grow it does.

Among the crafters of our constitution were lawmakers. And had vested interests as well. They all took the vested interest into consideration. These slimy scum of the earth people were not serious about their view on nepotism. Nepotism is just another word. And because it is used so loosely and not clearly defined, because some people seem to not want to define this term, is the reason for its being abused in the political arena.

Mind you, it's not only nepotism that was forgotten in the constitution. Creating this so-called Party List was actually a safety guard for the lawmakers whose terms were ending or who would have been displaced after their terms in office. It became a reason for wanting to stay in public office.

It is not so much that in the banana republic, there is no decent job for the Pinoys. It's just that there seem to be vacancies in government that the Pinoys seem to want to hold on to. And never let go. So the list of families in government service has ballooned disproportionately.

Out of curiosity, if there is no money in traditional politics, why does everyone want to seem to fight and die just to be a public servant? Hogwash! There is money from greed and corruption. And the more seasoned the politician is, the easier it seems for him to be able to get away with so much graft.

And you should see how much their wealth has grown each year and even the BIR (Bureau of Internal Robbers) do not seem to be running after them or their families. How can you explain such ostentatious display of wealth? Please, don't make us look really stupid. Darn!

It will not only take a political will to break down the barriers in the political system in the Philippines. The families that form various stakeholders in the dynasty game plan are the most resistant to change.

Even if someone like Noynoy would win, there will still be the majority who will be resistant to tearing down their dynasties and clans or use the backdoor, to remain in power.