The tax payer and the tax collector 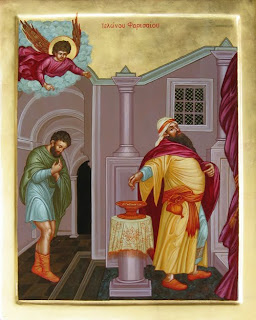 The Bible has stories of the tax collector. Either as a lowly man who recognizes he is sinful or as the proud man who believes that he gives God more than any other man from what he collects from the people. Either ways, even in the Bible, the tax collector is projected to be a sinner.

And no where in the Bible is the poor tax payer mentioned. It does not acknowledge the common worker in order to pay for taxes that Augustus Caesar has decreed on his people. It only recognizes the greater sinner - the tax collector.

Together with the modern day tax collectors are the devils that surround the tax collection system in the country.

I cannot understand why the minimum wage earners should be exempted from paying taxes. The illogical reasoning that because of inflation and high cost of living they have difficulty in making ends meet is a pathetic excuse. The only logic here is when you work, you must pay taxes corresponding to this. Give to Caesar what is Caesar's, and to God what is God's. I thought even the Bible made that very clear! Services rendered, services paid for, require taxes that should be paid to Caesar.

Imagine if you have 10Million people who work on minimum wage, that's a lot of moolah to collect.

And then of course the politicians who make the law do not want to stir the hornet's nest. Never mind bleeding dry the white collar workers, but spare the blue collar workers - masons, public utility drivers, barkers, street vendors, farmers, etc. Our Philippine taxation system sucks! And sucks big time. My accountant tells me that to pass accounting and be a certified public accountant in the Philippines, you have to be a genius!

With so many laws and a complicated taxation scheme, this country is headed for doggie land, where all you see around you are the pool of shit made by the lawmakers and financial gurus of the government.

I am not an economist. I am a mathematician. Simple arithmetic recognizes that in order to balance the sheets, what comes in goes out in the same proportion and vice versa.

Which comes down to basic mathematics.

If the budget deficit is large, it can only mean one of two things - there is little coming in OR there is more going out. The Bureau of Internal Revenue (BIR) claims that the collections are low or off target. Which means that their forecasted collection is either unreasonably high or is an imaginary number that is unachievable except in dreams. Let me give them the benefit of the doubt. Which means that there may be many who have not paid their taxes correctly. We should encourage the BIR to fill up all the remaining jail cells and the courts with cases against everyone who are not paying taxes correctly.

But this does not seem to be a problem that the government can handle sufficiently because if it is, there will be so much backlog in the courts and there will be so many people in jail that no one will be working for the economy anymore. Besides, it sounds illogical to put the very people who somehow or the other pay taxes (through one way or another) in prison, while the lackeys do nothing but stand in the street each day, hoping that their protruding bellies will somehow make the economic problems of this country go away. Or to see big names like Tan, Sy, Zobel, Madrigal, Gokongwei, Pangilinan, et al. in jail?!?! Never mind Juday and Goma, but not those big wigs rubbing elbows with La Presidente!

Then there is the problem about the taxes we pay. If the government tried to tighten its belt (to the point of self-sacrifice), then we probably wouldn't be in such deep shit today. The reason for increasing the budget each year for government agencies according to Ate Glue is so that more spent for public service, is a lot of hogwash.

I actually DARE the BIR to show all the receipts of what government officials spend. Make them public and I believe the Filipino people will then either pay their taxes correctly OR not pay taxes at all!

How can a Congressman afford to buy 4 Lacoste Shirts each week? How can a Senator afford to go out of the country with his entourage and spend millions of pesos on one dinner or lunch alone? How much do military officials get in both salaries and perks? How can they carry hundreds of thousands of Euros for a field trip out of the country? How are our foreign affairs diplomats compensated? What kind of living standards are they entitled to?

In short, there's too much going out as well. It is shameful that our government officials go on a spending spree with hard earned taxpayers money while every Juan de la Cruz is begging to live a more dignified life - a roof over their head, three meals a day, educational opportunities, health priorities...to name a few.

The problem with public officials is that they love to show off. And they use our money to show off what they perceive they have but in actuality don't have. Sanamagan these Pinoys!

There needs to be a redefining of the concept of taxation in this country. Transparency and accountability seem to be two of the most needed things in government today. It is, unfortunately, wanting.

Until this is achieved, there will always be a budget deficit.

And we will always be third world.
Posted by Kid at heart at 12:48 PM