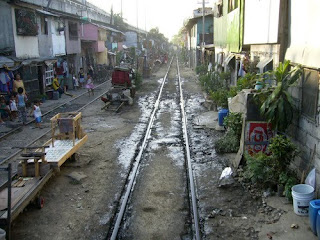 Translated means the poorest of the poor.

And so Joey Salceda, Albay Governor, has formally declared that more Filipinos suffer from hunger, and more Pinoys are poorer today than they were before Ate Glo became president.

Ironically this is contrary to what the people in the Palace were declaring. It is also contrary to what Ate Glo was claiming in her paid advertisements on her accomplishments as president of the Philippines for the past nine years.

The answer of the people in the Palace? "It could have been worse!"

Sanamagan country. Can anyone really explain this kind of excuse? Jeez, I would have thought the people in the Palace would reply - "Oh we're sorry for stealing and eating thousand dollar steaks and going out of the country to watch Pacquiao fight using taxpayers money". Nope. They go ahead and say, "well, it could have been worse."

Such shitty reply deserves multiple slaps on the face of every public official that has stolen from the coffers of the nation!

But the Pinoys are forgiving (or the majority are poor and have congenital
Alzheimer's) that they are actually being misled by the jingles of Manny V that he is the Moses who will deliver us from all the poverty.

According to Salceda, the poor have become poorer and the rich richer. Among the CEOs and executives of the top 1000 corporations in the country, their wealth has grown anywhere from 15-25% in the last 6 years.

That leaves Juan de la Cruz either peddling in the streets, hunting for jobs OUT OF the Philippines, committing crime, joining noontime game shows and gambling their hard earned peso in the lotto to get rich quick, doing drugs to forget the pathetic living, or joining the bandwagon of elective officials in the upcoming elections!

Here in the Philippines, every election year is categorically classified as sex and violence. They shoot each other even for a petty position as Barangay Tanod!!

Poverty is a social condition brought about by graft and corruption. It's not that not enough taxes are collected. It's that graft and corruption has plunged people into being so poor that the taxes collected do not translate to better roads, better education, better health care, better infrastructure...

Politicians live in Palaces. That, is a given. I have two new neighbors - one is a congresswoman and the other is a retired general. Their houses occupy over 1000 sqm of prime property. They were completed in less than 6 months. With what they make in their elective positions each month, even with combined salaries, they cannot afford to buy a government subsidized housing project.

It's the reason why the promise the moon and the stars to every gullible yagit - jingling all the way, asking different denominations to vote for them, paying movie stars to endorse their candidacies - because of the power, the glory and the money!

In short, RAKET ang politika (politics is a racket), in this country.

Perhaps, politics in dirty in many countries of the world as well. That does not excuse us from following these shitheads.

The gap between the rich and the poor has actually thinned out. The middle class is mostly in exile - in other countries as OFWs.

Once the gap is gone, a revolution will occur sooner or later.

And the Yagit, in sheer numbers, whom we have used and abused over the years, will always win!
Posted by Kid at heart at 6:14 PM